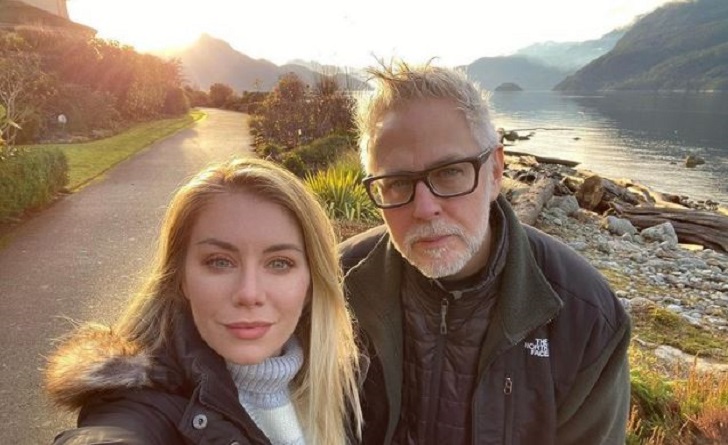 James Gunn is a famous Hollywood filmmaker. Gunn is best known for his directorial and writing credit in the superhero film Guardians of Galaxy. Also, James is an executive producer of Avengers: Infinity War and Avengers: End Game.

Because of the successful professional works, James’ personal life details are also searched in the media. In the following sections, find Gunn’s relationship with actress Jennifer Holland. Also, know about his past affairs.

The 35-years-old Jennifer Holland is an American actress who has been a part of the Hollywood Film Industry since 2004. The actress Holland started her acting career working in the film The Sisterhood and series Drake & Josh, Dante’s Cove. Jennifer has also made her appearance in James’ directed films and series such as The Suicide Squad, Peacemaker, and Bightburn (James as a writer, producer).

The Hollywood entertainers James and Jennifer began their romantic relationship in July 2015. Their mutual friend Michael Rosenbaum introduced Holland and Gunn. Since then, the Guardians of Galaxy Vol. 2 director James and American Horror story actress Jennifer share a healthy bond.

For the information, the actress Kaia Gerber has also featured in The American Horror Story.

The Saturn Award-winning director James finally got engaged to his longtime girlfriend, Jennifer. Gunn proposed to Holland with an engagement ring on February 20, 2022.

James revealed the news of engagement via Instagram post. In the picture, actress Jennifer is wearing a rectangular diamond engagement ring on her ring finger. Similarly, on February 20, 2022, Holland shared a photo with James captioning, “Happiness,” with rainbow, red heart, sun and cloud emoji. Additionally, James and Jennifer are planning to exchange the wedding vows soon.

Before starting a relationship with actress Jennifer, the Scooby-Doo writer James was in a marital relationship with Jenna Fischer. James’ first wife, Jenna, is also an actress famous for portraying Pam Beesly in The Office.

Jenna and James walked down the aisle on October 7, 2000. Jenna has briefly appeared in the superhero comedy film The Specials, where James worked as a writer. Fischer and Gunn shared a good bond. However, after seven years of marriage, they announced their separation on September 5, 2007, finalizing a divorce in 2008.

Even after the separation, Gunn and Fischer share a good bond as friends. Jenna coaxes James to take Rainn Wilson (her co-star from The Office) as a cast of James’ film Super (2010). Besides, actor Rainn is also the movie’s (super) executive producer.