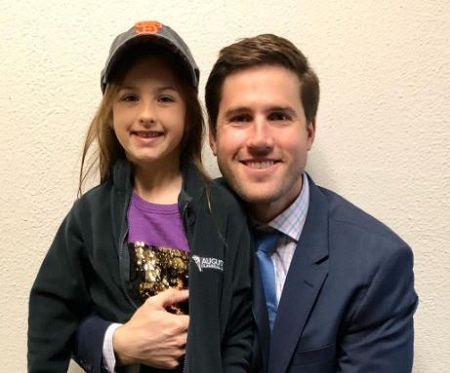 People know John Henry Lane III, aka JJ Lane, for his appearance in reality shows. Lane is the cast of the reality dating show Bachelor in Paradise (season 2) and The Bachelorette (season 11). Besides, the reality star, J.J., is a former investment banker.

John currently serves as managing partner at Friesian Capital. JJ Lane is a graduate of the University of Denver. Likewise, Lane is the Associate at The Forbes M+A Group. From the professional works, Lane is gaining wide media attraction. Now, let’s read about his past and present marital relationship.

JJ Lane Is A Father To A Beautiful Daughter

The 39-years-old JJ Lane was in a marital relationship with Heather Sands. The detailed information regarding J.J. and his first wife Heather’s wedding is missing.

However, J.J. shared an adorable daughter, Gemma Lane. How and when J.J. and Heather ended their marital relationship is unclear. But, as of now, J.J. is merrily parenting his lovely daughter Gemma. She can be seen on most of the posts updated by J.J. on his official Instagram account.

Gemma is involved in sports activities. She plays volleyball and does ice hocking. On October 4, 2021, J.J. shared a picture with her daughter, captioning, “First place in her volleyball tourney!! But more importantly, we are so thankful and proud of Gemma. She’s the most resilient, positive, hard-working, brilliant girl.”

After separating from Heather, JJ began his romantic relationship with Kayla Hughes after meeting for the first time in August 2017. Additionally, Kayla is a former NFL cheerleader.

Following one-year-long dating, J.J. proposed to Kayla. On January 29, 2019, Lane got down one knee and proposed to Hughes at the Beach House Restaurant Kauai. Kayla also happily accepted his proposal. The couple announced the news of their engagement via Instagram post.

Later, on February 29, 2020, J.J. and Kayla tied the wedding knot at Ironworks, Denver, Colorado. Kayla exchanged the vows wearing a floor-length, long-sleeved wedding dress from Something New Boutique. On the other side, the groom, J.J., dashes the wedding look wearing a black tuxedo.

Since the wedding day, Mr. and Mr. Lane are sharing a good bond as a perfect married partner. J.J.’s daughter Gemma is also close to her stepmother Kayla.

On December 26, 2021, J.J. and his wife Kayla revealed that they are expecting their first baby. On the Instagram post, J.J. wrote, “Won’t be able to unwrap this present until July.“

Similarly, Kayla announced her pregnancy, saying, “The best gift wasn’t under the tree this year. Littlest Lane is coming July 2022.” As of now, soon-to-be parents are eagerly waiting for their baby to come. In January 2022 post, J.J. announced that they are expecting a baby girl.

Likewise, Gemma is also excited to meet her younger sister.