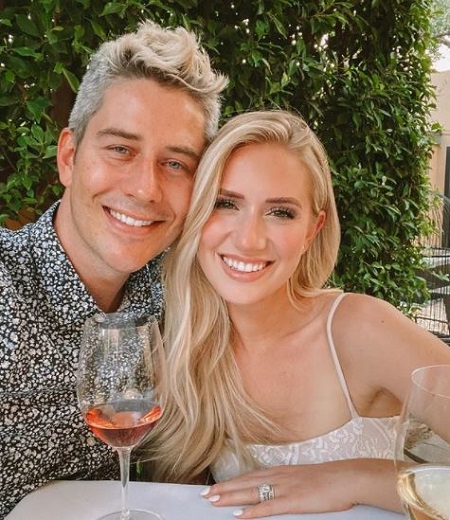 The Bachelor season 22 couple Lauren Burnham and Arie Luyendyk Jr still share a healthy relationship. Not only a lovebird, but the duo is happily married and parents to twins and a daughter.

Besides the reality star, Arie Jr is an auto-racing driver. He has competed in sports-car series such as 12 Hours of Sebring, Indy Lights Series, etc. Similarly, the Old Dominion University graduate Lauren is the founder of ‘Shades of Rose,’ a clothing brand. Now, let’s read more about this beautiful pair.

First Met In The Bachelor (Season 22)

As mentioned above, Arie Jr and Lauren are the pair made in the reality series, The Bachelor. Although Burnham became the runner-up of the season, she won the heart of Arie.

At first, Arie was engaged to season’s winner Becca Kurfin. However, after two months, he announced that “he made a mistake and wanted to be with Lauren.” In March 2018, during the last of the season, Arie popped the questions to Lauren.

Proposing Burnham, he said, “I made some bad decisions but the best decision was running back to you. I’m ready to face this life with you and all that comes with it. I love you so much. I wanted to do this in front of everyone because I want to show you that I should have done this a long time ago.”

Again on October 4, 2021, Lauren and Arie re-engaged. Announcing it on Instagram, she wrote, “we’re ENGAGED! again. This time, just for us.”

Following a year-long engagement, Arie and Lauren decided to tie the wedding knot on January 12, 2019. The intimate wedding ceremony was held at Haiku Mill, Hawaii.

Burnham wore a beautiful headpiece designed by Lindsay Marie. Likewise, her earpiece was from Molina Fine Jewelers. on the other hand, the groom, Arie, walked down the aisle wearing a black tuxedo from Kenneth Cole Productions, Inc.

The couple announced their wedding via Instagram post. Since the wedding day, Mr. and Mrs. Luyendyk have been sharing a healthy bond as perfect married partners. The married duo has already celebrated their 3rd wedding anniversary. Additionally, Lauren and Arie also run a YouTube channel (Lauren & Arie).

Arie and his wife Lauren are parents to their three adorable children. On November 14, 2018, Burnham and Luyendyk announced their pregnancy. On the Instagram post, Arie wrote, “nothing compares to the moment you find out you’re going to be a dad. We cried, we laughed and it really was such a special moment for us.”

Similarly, on December 22, 2020, Mrs. Luyendyk revealed her second pregnancy. On June 11, 2020, Lauren gave birth to twins Lux Luyendyk and Senna Luyendyk. As of now, Lauren and her husband Arie are jointly parenting their kids. Also, Luyendyk siblings can be seen on posts uploaded by their parents on their social sites.