Skip to content
Home » Entertainment » Who is Andrea Cameron? Mother of Tyler Cameron

Who is Andrea Cameron? Mother of Tyler Cameron 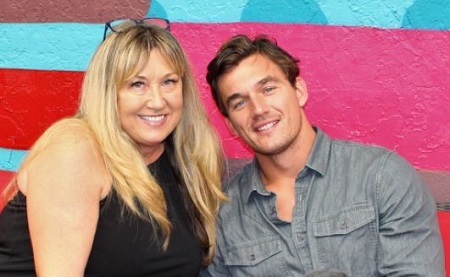 Andrea Hermann, also known as Andrea Cameron, is no more in this world. Andrea was living a limelight life as a celebrity mother. She was the mother of the model and reality star Tyler Cameron.

Tyler’s mom Andrea worked as a real estate agent in South Florida. Now, let’s read about Andrea’s personal life and other details in the following sections.

On February 28, 2020, The Real Dirty Dancing contestant Tyler tweeted, “Have to cancel GMA group run tomorrow. Family emergency. Please pray for my mom and my family.”

Andrea was taken to the Jupiter Medical Center. Later, on March 3, 2020, Cameron announced her mother’s death via Instagram post. He wrote,

“Today, heaven gained an angel. We will love and miss our mother dearly. She will live on through us and through those that she has impacted. While we grieve, we ask for two things: First, tell those you love that you love them; and second, please let us take this time to celebrate her life in private. Thank you for all of your love and support.”

In an interview with The Palm Beach Post, Tyler and his brothers revealed that Andrea passed away at 55. The cause of her death was a brain aneurysm.

Was Married To Jeff Cameron

The realtor, Andrea, was in a marital relationship with Tyler’s father, Jeff Cameron. How and when Andrea met jeff and tied the wedding knot is unclear.

However, Andrea and Jeff’s marital union ended due to the financial crisis. At the time of the Great Recession (2007-2009), Andrea and her family lost their home, among a number of others. The situation also results in the divorce between Andrea and Jeff.

Andrea Cameron Is The Mother Of Three Sons

Andrea and Jeff shared three boys from their marital relationship. She gave birth to their first son, Tyler Cameron, on January 31, 1993. Similarly, their other sons are Austin Cameron and Ryan Cameron (b. August 1999).

Tyler Cameron and His Girflriend split after 8 Months of Dating

Andrea‘s son Tyler was in a relationship with Camila Kendra. The couple were together for 8 months however their relationship didn’t go well so they repeated. Their fans noted that the couple had unfollowed one another on Instagram, and the beauty has also unfollowed Cameron’s brother.