Manti Te’o is an American football player who played for different NFL teams during his 8 year-long career. The star also won various awards and became the captain of San Diego Chargers. 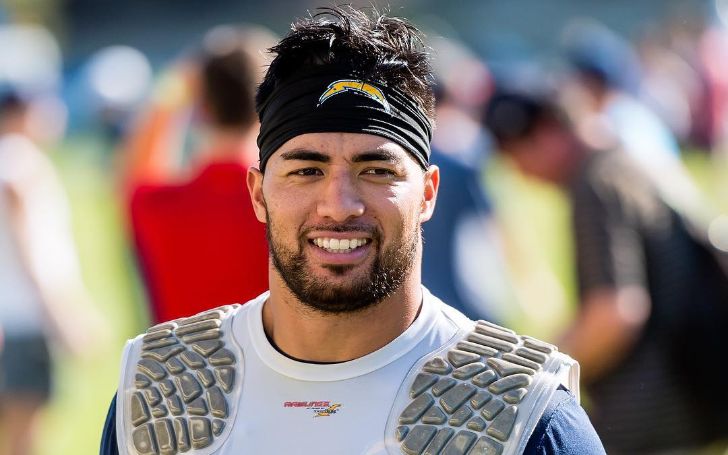 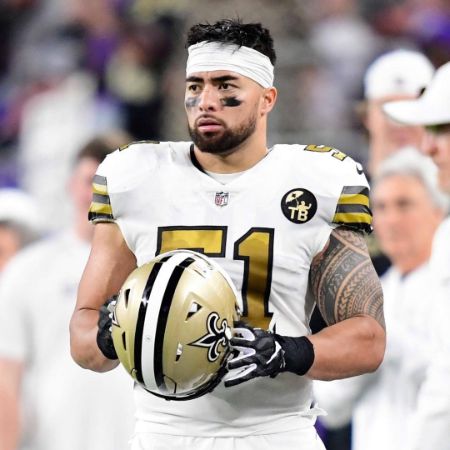 To know more about Manti Teo’s Early Life, Education, Career, Girlfriend, Scandals, and Net Worth, please read the entire article and stay tuned to our website for exciting gossip and biography.

Manti Te’o was born on 26th January 1991 in Laie, Hawaii, USA. Furthermore, the star was born into a massive family with six children, including him. Manti’s parents are Brian and Ottilia Te’o, and his siblings are BrieAnne, Tiare, Eden, Maya, and Manasseh.

The talented player completed his high school at Punahou School, Honolulu, Hawaii, with an impressive 3.5 GPA. Later, the star went to Notre Dame to complete his higher education and play for the college team.

Te’o started his football career in his junior year in high school. Moreover, the athlete had exceptional talent and a great body structure that was perfect for the sport. Manti continued to showcase his perfect game in varsity; hence, the star was drafted as a second-round pick in the National Football League (NFL).

With a height of 6ft 1in and a weight of 109 kg, Manti was sure to dominate the Football league. Moreover, we can say that the star lived up to the hype created by the fans.

Manti Te’o is in a happy relationship with his wife, Jovi Nicole. Furthermore, the couple met each other in 2016 and have been madly in love since then. On 29th August 2020, the lovebirds decided to take their relationship further and married each other.

Teo’s wife, Nicole, is a personal trainer and a beauty consultant. Additionally, the star wife has completed her bachelor’s degree in Business Administration and Management from Arizona University.

The lovebirds currently have an angelic baby daughter and a child on the way. Despite being in the spotlight due to his vast girlfriend hoax, the star still managed to find the love of his life, and the duo lived very happily.

Jovi also refers to Manti as her best friend and the love of her life. Similarly, the couple can be seen posting cute family photos with captions that leave the audience in awe.

Untold: The Girlfriend Who Didn’t Exist

After this tragic incident, the fans gave Manti immense love and support. The entire world was in tears after hearing about the saddening loss of two innocent souls. Despite facing all these hardships, Te’o led his team to a 20-3 victory against Fighting Irish, where the star had 12 tackles.

We should not jump to conclusions before looking at what is considered one of the most incredible plot twists in a story.

After the story received much attention from the media, officials began further investigating Manti’s girlfriend’s identity. The football player had mentioned that his girlfriend was a Stanford student, and the duo met at a football game.

The Stanford student newspaper did not mention the passing despite his girlfriend studying there. To top the story off, the Stanford registrar’s office had no record regarding the enrollment of Lennay Kekua (Manti’s girlfriend).

When the netizens dived further into this topic, they discovered that the pictures used for posting condolences were fake and belonged to a 22-year-old living in California. Moreover, the girl had no ties with Manti.

Therefore, the whole girlfriend incident was a Hoax. Te’o, whose career was finally blooming, received massive hate to the point when he was mentally unstable.

Finally, after a decade, Netflix released a documentary covering the entire story covered, including Manti’s interviews. The athlete finally spoke up on the topic and admitted the story to be a catfish.

Surprisingly, the NFL player has received mass support, and people have begun appreciating his life story after the heart-touching documentary. All thanks to Untold, Manti has gained his reputation back.

What is the Net Worth of Manti Te’o?

Manti Te’o has a gigantic net worth of $12 million, similar to Kay Burley. Furthermore, the star earned a hefty salary as an NFL player during his eight years long career. According to sportrac, manti earned a minimum six-figure wage until his free agency in 2020.

We will be breaking down his salary from his debut season to his final season before becoming a free agent.

After being drafted by San Diego Chargers in 2013, Manti signed a four years long contract for a whopping $5,172,420 and a signing bonus of $2.1 million. Furthermore, the star performed exceptionally well during his contract and became one of the team’s captains in 2016 alongside Michael Scofield.

In 2017 the star signed a two years contract with the New Orleans Saints worth $5 million and a signing bonus of $600,000. However, Te’o couldn’t perform well during his tenure and was mostly inactive.

Surprisingly, the Saints signed a new one-year deal with the athlete worth $805,000.

At 29, the Chicago Bears gave Manti a spot on their practice squad and offered him a one-year contract with a salary of $132,000. Later the star was promoted to the main roster for the playoffs against New Orleans Saints.

Facing a loss in the playoffs reverted Te’o to the practice squad and became a free agent later that year.

Despite having a series of ups and downs, Manti Te’o is still doing well for himself with the massive net worth he acquired over the years. Additionally, the star and his family spend most of their time together in their luxurious condo.