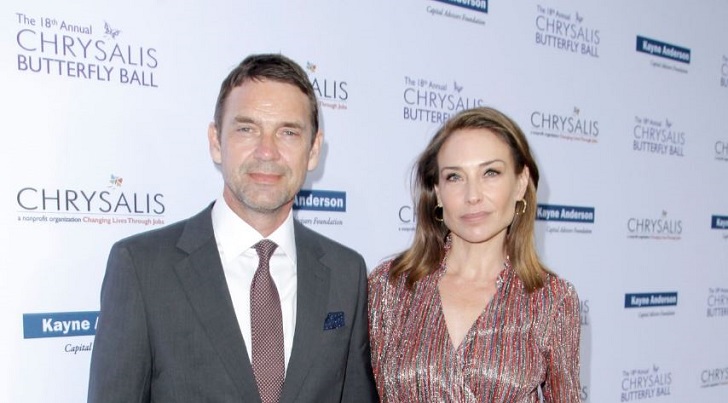 Claire Forlani was born on December 17, 1971, in Twickenham, London, to Pier Luigi Forlani and Barbara Forlani. The passionate actress Claire chooses the Art Educational School, London, to study acting. Later, she entered the film industry in 1991, making her debut in the comedy-drama Press Gang.

Forlani’s acting career takes a turn and rises to fame after her portrayal of Brandi Svenning in the 1995 buddy comedy film Mallrats. Similarly, the British actress Forlani’s role as Susan Parrish in the romantic fantasy film Meet Joe Black is also popular. She shared her screen with a well-known actor Brad Pitt in the movie.

From a promising professional acting career, Claire has managed to earn a decent sum of wealth. The 5-feet-4-inch (166 cm) tall actress has a net worth of $7 million per estimation. Her appearance in successful movies and TV shows doubtlessly makes her one of the most prosperous actresses in big and small screen films.

The 56 aged Glenrothes, Scotland native Stephen Dougray Scott, aka Dougray, is also obtaining stardom for being an actor. Scott, who studied at the Royal Welsh College of Music & Drama, made his acting debut in 1990 by working in the film Zorro.

Dougray’s other notable credit includes Ever After, To Kill A King, The Ten Commandments, DMy Week with Marilyn, Batwoman, The Day of the Triffids, Deseparate Housewives, etc.

The CSI: NY actress Claire met the Enigma actor Douglas via a mutual friend in 2006. Soon after the meeting, Scott and Forlani get into a romantic relationship.

Similarly, Dougray did not delay in asking to marry him. After several months of dating, he popped the question with a diamond ring in Los Angeles in September 2006. Claire also happily accepted the “romantic” proposal.

Dougray, speaking to People, “I feel so lucky to have met her. She’s [Claire] an amazing actress and human being. I’m very happy.”

Got Married In Italy

The lovebird exchanged their wedding vows in a civil ceremony in Italy on June 8, 2007. Claire wore a satin strapless gown by New York-based fashion designer Junko Yoshioka on her big day. Similarly, she chooses to make a low bun hairstyle wearing pearl drop earrings. On the other side, Dougray got hitched wearing a black tuxedo, white shirt, and a white tie.

Since the marriage, Claire and her husband Dougray have been living a blissful marital life sharing an inseparable bond. Mr. and Mrs. Scott have been married for 15 years (more than a decade). Dougray and his wife Claire rarely make their presence on social sites and attend public programs.

Additionally, the husband-wife duo has made their joint appearances in the 2010 romantic comedy film Love’s Kitchen as Rob Haley and Kate Templeton. Similarly, Claire and Dougray have worked together in the suspense drama series Departure as Janet and Ethan Moreau.

The Mystery Men actress Claire and her spouse Dougray shared a son, Milo Thomas Scott, from their decade-long marital solidarity. Milo Thomas was born on December 27, 2014, and is not the biological son of Claire and Dougray.

They adopted Milo when he was nine-month-old. In an interview with The Guardian, Dougray said,

“That one of my children is adopted makes no difference to the love I feel for them. The first time I set eyes on Milo, I thought: that is my son. I love him just as much as I do my biological children.

Scott continued, “There is no difference whatsoever. I would put my life on the line for him, as I would for the twins. My whole perception of adoption changed the moment I saw him. He is part of me, 100%.” As of now, Claire and Dougray are jointly raising their son Milo. Like, Joni Jane Brooklyn Brammall, an adopted daughter of actor Patrick Brammall and his wife Harriet Dyer, Milo Thomas is also living a spotlight life and receiving media attention as a star kid.

Milo Thomas is the only adopted son of Claire, but she does have twins from his now-husband Dougray’s former marital relationship. Scott was married to Sarah Trevis. His first wife, Sarah, the University of Manchester graduate, has worked in the casting department of Silent Witness, Fairytale: A True Story, etc. Trevis was also the casting member of the Indian 2022‘s blockbuster movie RRR.

Sarah and Dougray tied the wedding knot in April 2000. From the marital bond, they welcomed twins, a son Gabriel Trevis Scott and a daughter Eden Trevis Scott on January 23, 1998, in Queen Charlotte’s Hospital, London. However, after a five-year marriage, Sarah and Dougray ended their relationship in August 2005.

The 24 aged Gabriel and Eden share a close bonding with Claire and half-brother Milo Thomas. They sometimes make their presence on Forlani’s official Instagram account with more than 100 thousand followers.