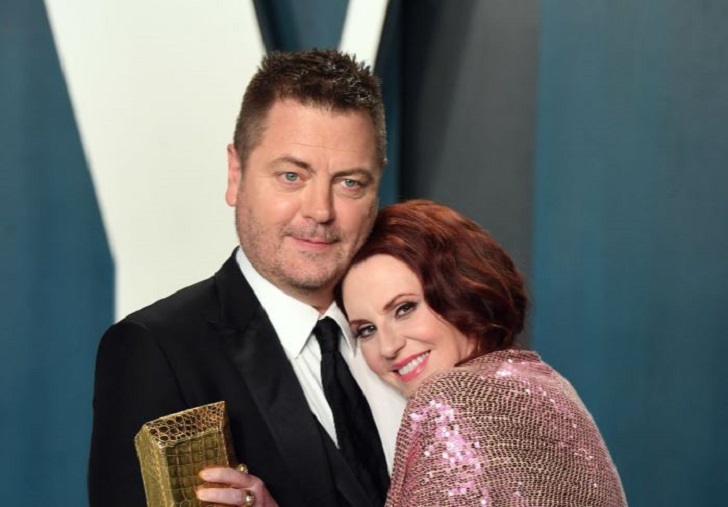 The American actress Megan Mullally is worldwide famous for her leading portrayal of Karen Walker in Will & Grace. The Primetime Emmy Award-winning Mullally studied English Literature and art history at Northwestern University. She has been a part of the Hollywood Film Industry since 1979.

Megan, a 5-feet-4-inch (163 cm) tall actress, has earned a hefty sum of wealth from her successful professional career. Mullally owns an approximate net worth of $25 million. Is Megan living a successful personal life like her professional life? Know the detailed information regarding Megan and her husband Nick Offerman‘s marital life in the following passages.

Like Megan, her beloved husband, Nick Offerman, is a well-established actor in the Hollywood Film Industry. Nick has proved himself a successful actor in his nearly three-decades-long acting career. Offerman has received prestigious accolades such as Television Critics Association Award, Prime Time Emmy Award-nominee, etc.

The 51 aged Nick is widely popular for playing the leading role of Ron Swanson in the NBC political satire mockumentary sitcom Park and Recreation. Offerman’s other credits include Conan, The Last Us, The Founder, The Lego Movie, Pam & Tommy.

Similarly, Megan and Nick have made their appearances together in The Kings of Summer, Smashed, Bob’s Burgers, Hotel Transylvania 2, Children’s Hospital, The Great North, etc. Likewise, Mullally and Offerman host the podcast In Bed with Nick and Megan.

Besides, actor Nick is a wood craftsman who makes wooden boats, canoes, etc. Moreover, he has published books such as ‘Paddle Your Own Canoe,’ Gumption, Good Clean Fun, The Greatest Love Story Ever Told (co-author, Megan), and Where the Deer and the Antelope Play.

Journey From First Meeting To Marriage

The Hollywood entertainers Megan and Nick had their first encounter on the set of the play The Berlin Circle, by the Evidence Room Theatre Company, in 2000. The first meeting was enough for Mullally and Offerman to fall for each other and begin a romantic relationship.

Nick and Megan decided to take their relationship to the next level after three years long dating. The lovebirds got married on September 20, 2003. They got married in a private wedding ceremony attended by their dearest ones. So, detailed information regarding marriage is lacking.

Also, know the marital status of the Parks and Recreation actress Mo Collins.

Since the big day, Mr. and Mrs. Offerman have shared a healthy marital bond. The married duo has already celebrated their 18th wedding anniversary, and the bond is still going strong. Megan and her husband Nick have not shared any kids from their marital life.