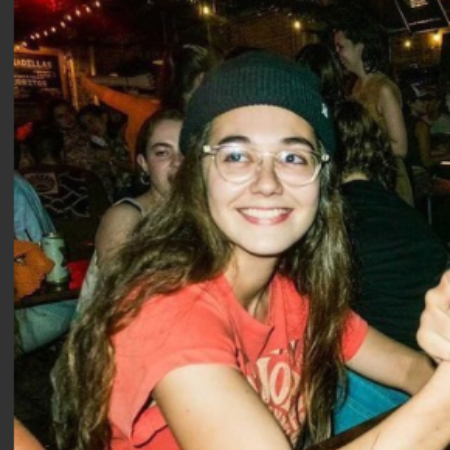 Rachelle Vineberg is a well-known Skateboard artist and an actress, who was born in America. Vineberg is famous for her featuring in movies like Camille and skate kitchen.

Most of us have known her for her skateboarding background and Tv series appearances, but have you got knowledge about her personal and professional life? If not then, we are going to learn about her net worth, relationship status, age, and many more.

The American artist was born in Long Island, New York on the 27th of August, 1998. The 22-year-old was born to an American father and a Columbian mother. Further, she grew up with two brothers, an older and a younger. The skateboarder attended Brooklyn College, where she majored in filming.

From an early age, Rachelle was interested in skating, furthermore, she learned tricks via YouTube. The content creator also was taught ollie by her older cousin. The actor stands at 5 feet and 5 inches and currently weighs around 54 kilograms. Moreover, the skate kitchen star’s zodiac sign is Virgo.

The New York-born actress was born in a Middle-class family, where he father was an American citizen and her mother was from Colombia. She grew up with an older brother and a Younger brother. However, Vinberg has not revealed the identity of her parents as she wants to keep her personal life private.

Who is Rachelle Vinberg Boyfriend?

As per reports by Evening Standard news, The 22 year is rumored to be dating her close friend Toby. The lovely couple often share pictures of each other on their social media handle.

However, the Betty Tv show actress hasn’t disclosed her relationship on the online platform which leaves us room for speculation either they are a couple or just friends. But overlooking their closeness and shared activities fans surely love their ‘ship’ and wish them to be soul mates.

From skating on the alley to becoming a well-known skateboarder, Vinberg has come a long way. The talented individual started to upload her skating videos, on the 16th of January, 2012. Her official YouTube channel contains 25 videos, which mostly contains Skateboarding vlogs.

Along with her friends Nina Morgan and Crystal Moselle, the actress made a short video about skating, which was later remade into a movie. Rachelle was noticed by a casting director, while she was skating with her friend at Les Skatepark. She was approached to feature in a Samsung commercial.

After acting on few gigs, she was cast as ‘Camille’ on the Hit Tv series ‘Betty‘, which was directed by Crystal Moselle.

How Much is Vinberg’s Net Worth?

Furthermore, her movie earned a huge number at the box office, for instance, Skate Kitchen ($236,799), and that one day. Moreover, her popular Instagram account generated a 6.78% engagement rate, which attracts brand endorsements. The talented actress also has 9 credits on her IMBD page, including two tv-series and short movies.

We hope you enjoyed reading facts about Rachelle. You may also like to read biography Nina Morgan.