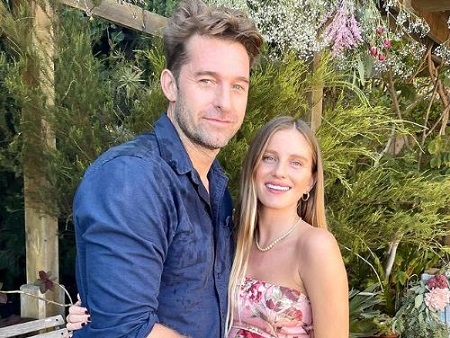 Scott Speedman, who holds British and Canadian nationality, has been a professional actor in films and TV series since 1995. Speedman’s role as Ben Covington in the drama series Felicity is getting worldwide recognition, for which he also gets a Teen Choice Award nomination.

The 5-feet-11-inch (180 cm) tall Robert Scott Speedman‘s other performances include Underworld (2003), The Strangers (2008), Animal Kingdom, and Grey’s Anatomy. From his professional acting career, Scott not only receives public attention, but he is also earning well. Celebrity Net Worth suggests he has an approximate net worth of $3 million.

Besides his professional life, the actor is also living his personal life blissfully with his dearest partner. Get to know the detailed information regarding Speedman’s present relationship status in the following sections.

The information regarding Scott’s first meeting with his now-partner, Lindsay Rae Hoffmann, is unclear. But Lindsay’s Instagram uploads suggest they have been involved in a romantic relationship since 2017.

The October Gale actor Scott is having the best time with his girlfriend, Lindsay Rae. Hoffmann and Speedman share a healthy romantic relationship without building rumors about their separation. Their romantic bonding can be visualized on their respective Instagram posts. However, the pair has not yet engaged and shared their marriage plans with the world. But, they have already taken the responsibility of parents.

Lindsay took her Instagram with more than nine thousand followers on May 9, 2021, to reveal her first pregnancy. Sharing a picture of herself wearing a white dress showcasing the growing baby bump, she chooses to write, “In full bloom. Baby girl Speedman coming soon,” in the caption.

Later, in September 2021, the 46 aged Underworld actor Speedman shared snaps with Lindsay holding her belly, writing, “Really thought the fellas got to skip the baby shower.”

Hofmann and Speedman’s welcomed a beautiful baby girl, Pfeiffer Lucia Speedman, on October 26, 2021. Declaring her daughter’s birth, Lindsay wrote, “Pfeiffer Lucia Speedman. Our beautiful daughter was born at home on October 26th at 8:33am weighing 6.6lb. Pfeiffer, for her heart to always feel connected to the nature and sea & Lucia, to forever be our little “light.” We love you, little Pfeiff.”

On the other side, Scott shared a picture with his newborn daughter, writing, “Pfeiffer Lucia Speedman. Born at home on 10/26/21. In awe of my girl @lindsayraehofmann. Awe.” As of now, Scott and Lindsay are jointly parenting their only kid. Pfeiffer Lucia is living a healthy life with her celebrity father, Scott and mother, Lindsay.

The Citizen Gangster actor Scott’s partner Lindsay is a businesswoman. Hoffman is the co-founder of Juillet Swimwear, based in Los Angeles. Her Linkedin profile suggests that she previously worked as Editorial Account Manager at the Public Relations and Communications Service Company, Bollare.

Hofmann attended the University of Arizona, getting a degree in Nutritional Sciences/General Studies. Moreover, she was a Visual Merchandise Intern at Vivienne Westwood.