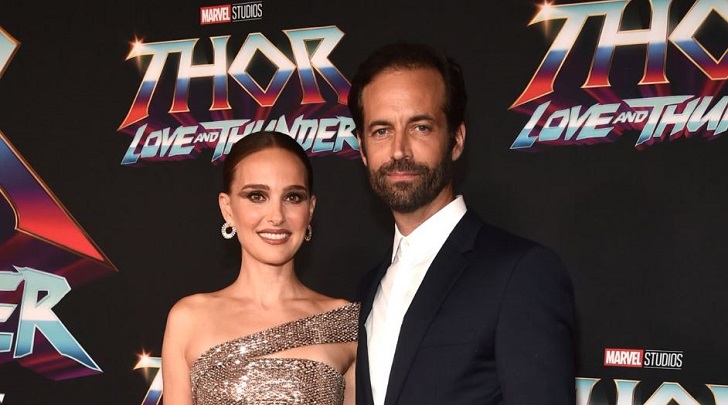 Benjamin Millepied, who attended the School of American Ballet (SAB), is a professional dancer and choreographer. He is the founder and an artistic director of the L.A. Dance Project (LADP), a dance company with the mission “to inspire, create, educate and change perspectives through the accessible and transformative power of dance in Los Angeles and around the world.” Likewise, Benjamin is also the co-founder of the multimedia production company Amoveo Company.

The dancer was born in Bordeaux, France, on June 10, 1977, to a former ballet dancer, Catherine Flori and her ex-husbnad Denys Millepied. Besides being a dancer, Benjamin is also pursuing his career as an actor and director. He has directed short videos such as Closer, Why Can’t We Get Along, and Hearts & Arrows. The dance tutor Benjamin is happily married to his celebrity wife, Natalie Portman. Here are some details regarding their secret marital life you need to know.

The 41-years-old dazzling beauty Natalie is among the most famous name in the acting world, having acting credits in successful and box-office hit films. The Israeli/American actress Natalie began her profession by performing in the Broadway, The Diary of a Young Girl at the Music Box Theatre.

Similarly, the 5-feet-3-inch (160 cm) tall Natalie’s leading appearance as Jane Foster in the superhero films Thor (2011), Thor: The Dark World (2013), and Thor: Love and Thunder (2022) are also highly loved by her fans. Moreover, Portman has served as a producer in Jane Got a Gun, Pride and Prejudice and Zombies, The Other Woman, etc. Furthermore, she is the director and writer of A Tale of Love and Darkness.

Benjamin and Natalie met while filming the psychological thriller Black Swan (2010). The actress played the lead part of Nina Sayers/White Swan, and actor Benajmin acted as David Moreau/Prince Siegfried. Millepied received a CinEuphoria Award nomination for the film, and Natalie took home an Oscar Award, British Academy Film Awards, and others in the category of ‘Best Film Actress.’

Their first encounter was enough for them to develop a romantic connection. Portman opened their meeting on SiriusXM, saying, “I met my husband on it [Black Swan set], so I think I was in, like, dreamland. We had a whole, like, he was teaching me to dance. You know, one of those romantic [stories]. It was definitely exciting and fun. It was beautiful. I don’t know about instant. It was like I really got to know him and that was when it seemed like, ‘Oh this is the person‘.”

After a year-long dating, Benjamin proposed to Natalie with an engagement ring. He pooped the question privately. In late. 2010 the couple also briefly announced that they were expecting their first child.

About choosing to keep her personal details secret, in an interview, Natalie said, “I have always kept my private life private but I will say that I am indescribably happy and feel very grateful to have this experience [pregnancy].” Benjamin and Natalie became parents for the first time on June 14, 2011, welcoming son Aleph Millepied.

Later, on September 8, 2016, Portman attended the 73rd Venice Film Festival in Venice, surprising the world as she wore a white one-shoulder dress showcasing her growing baby bump. On February 22, 2017, Portman and Millepied’s baby girl Amalia Millepied come into the world.

The 5-feet-10-inch (178 cm) tall Benjamin and his now-wife Natalie have chosen to keep their son Aleph, 11, and daughter Amalia, 5, far from the media attention and social networking sites. They are raising their kids privately.

Natalie and Benjamin tied the wedding knot on August 4, 2012. They exchanged the vows in an intimate Jewish ceremony held in Big Sur, California. The bride and groom’s family members and close ones made their appearance at the wedding event. Ivanka Trump and Macaulay Culkin were also part of it.

Portman wore a beautiful gown designed by fashion designers Kate and Laura Mulleavy from their fashion label, Rodarte. And Benjamin walked down the aisle wearing a black tuxedo.

Mr. and Mrs. Millepied now shares a healthy marital bond. Benjamin and his wife Natalie recently celebrated their 10th wedding anniversary. To wish husband Millepied on their anniversary Natalie shared a snap with him on her verified Instagram account, writing, “Ten years today @benjaminmillepied, and it keeps getting better.”