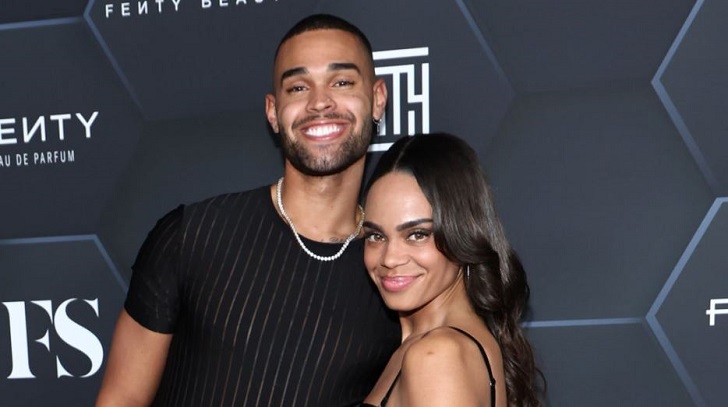 If you prefer watching dating game shows, you might have watched The Bachelorette. Today, we discuss the ABC series The Bachelorette (season 18)’s winner Nayte Olukoya. Winning the heart of Michelle Young led him to be the winner of the season.

Except for reality, star Nayte works as an Account Executive at DISCO, a software development company. As per Nayte’s Linkedin profile, he previously worked as Senior Account Executive at Indeed.com, an internet publishing company. Concerning education, Olukoya earned a Bachelor Of Business Administration (BBA) degree from Eastern Washington University.

Now let’s read the detailed information regarding Nayte and Michelle’s love life in the following sections.

Met In the Set Of The Bachelorette (Season 18)

The Bachelorette season 18 premiered on October 19, 2021. And Nayte was one of the 30 men who participated to win the heart of The Bachelor (season 25)’s runner-up Michelle Young. The 28-years-old Young is also an elementary school teacher except for a reality star.

Nayte received the first impression and rose from Michelle during the show’s premiere. Young also fell in love with the season’s runner-up Brandon Jones. Later, Young chose Olukoya over Jones and began sharing a good bonding. Their romantic bonding also captivated their fans which helped them gather immense popularity.

Since then, the middle school teacher Michelle and Account Executive Nayte have shared an inseparable bond.

After a month-long sharing romantic conception, Nayte got down to one knee and proposed to Michelle with an engagement ring at the show’s finale. The engagement was filmed in September 2021, and it was aired on December 21, 2021. He popped the question with a diamond ring in Mexico on the beach, saying, “I’m standing in front of you now, and the feelings are the same. I want to run away with you. I want to run away forever with a woman that I’ve come to love with this amazingly, crazy, wow kind of love.”

Michelle also merrily accepted his proposal. Sharing the engagement news, Young wrote a love note on her Instagram, saying, “Dear SoulNayte, stepping into the role as The Bachelorette, I was optimistic about what I would find. I hoped for a best friend, a lifelong partner, but I truly landed one of a kind. I’ve asked for someone who will never let go and you’ve already shown me you will be that man.”

As of now, Nayte and his fiancee Michelle are enjoying each other’s company. The lovebirds visit many exotic places together and never miss a chance to share romantic pictures on their social sites. Similarly, in February 2022, Olukoya and Young made their red carpet debut attending the beauty brands Fenty Beauty and Fenty Skin in Los Angeles.