Who Is Baker Mayfield’s Wife Emily Wilkinson? Know About Their Marital Details 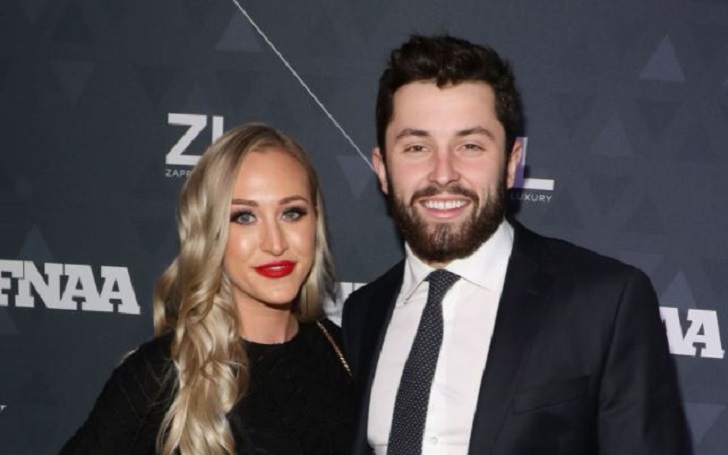 The 31-years-old Emily Wilkinson is an internet personality with more than 200 thousand followers on her official Instagram account. She shares beauty, fashion, and style tips, which have helped her gain the tag of an internet sensation. Similarly, Emily never misses a chance to support her hubby through her social sites.

Wilkinson is widely earning fame being the wife of American football quarterback Baker Mayfield. Baker, 27, is currently playing under the contract of NFL’s Cleveland Browns. Now, let’s find out how is Baker and Emily’s marital life going in the following sections.

The Nebraska native Emily and the Texas native Baker had their first encounter in 2017 after introducing by their mutual friend. It was love at first sight for Mayfield, whereas Wilkinson thought he was a “playboy athlete,” so she did not show her interest.

Baker began following Emily on Instagram to talk with her. But, she did not respond. After many attempts, Emily finally agreed and decided to start a romantic relationship with Baker. The duo began their affair in early 2018. The couple went official regarding their relationship in 2018 via posting pictures on Instagram.

Following four months-long datings, Baker got down to one knee and proposed to Emily with a diamond engagement ring. He popped the question on June 30, 2018, and she also merrily accepted the proposal. Baker and Emily announce their engagement through an Instagram post.

The University of Nebraska-Lincoln graduate Emily and her finance Baker take their relationship to the next level by marrying on July 6, 2019. Their romantic outdoor wedding ceremony was held in Calamigos Ranch, Malibu, California.

Likewise, Michelle Yenming and Hailey Hoff handled her hair and make-up. Moreover, Emily finished her wedding look wearing a diamond bracelet and earnings from XIV Karats. On the other hand, Baker chooses to wear a blue tuxedo from Southwick Clothes. Additionally, he wears Nike sneakers.

Since the wedding day, Mr. and Mrs. Mayfield share a blissful bond as perfect married partners. The married pair have already celebrated their 2nd wedding anniversary and is still going strong.