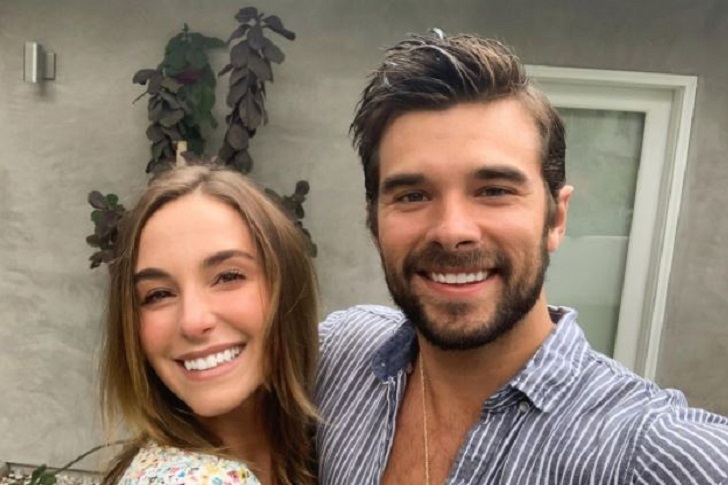 You might know American actor Joshua “Josh” Swickard from her recurring role as Todd Stetson in Liv and Maddie. Josh is also famous for his portrayal of Harrison Chase in the soap opera General Hospital. Besides, Josh is also involved in modeling.

The 6-feet-1-inch (187 cm) tall model Swickard is under the management of Wilhelmina Models, Los Angeles. Josh undoubtedly gathers fame and an impressive sum of wealth from his successful modeling and acting career. But what about his marital status? Is Swickard in a blissful marital relationship with his wife? Know about their wedding details.

The acting sector not only became a way to earn money and prominence for Josh, but it also became a path to finding a perfect partner. Josh’s now-wife Lauren Swickard, aka Lorynn York, first met while filming Roped in 2017.

In the film, Josh plays the role of Colton Burtenshaw, and Lauren portrays the character of Tracy Peterson. After the first encounter, Lauren, 28, and Josh, 29, shared a good bond and soon began their romantic affair. Similarly, York and Swickard have also worked together in A California Christmas.

Following a year-long dating, the Hazel-eyed Josh proposed to Lauren with an engagement ring. He popped the question in December 2018 during their trip to Beaver Creek Mountain camp. The pair announced the engagement via an Instagram post.

Telling the news, Lauren wrote, “Introducing my future HUSBAND! I am the luckiest girl on this planet. Never have I experienced a friendship so wonderful, a love so deep, and a life so full of JOY until I met this man. Here’s to forever baby. #finace.”

The Intimate Wedding In Florida

After five months-long engagement, the General Hospital actor Josh and the Twisted Twin cast Lauren exchanged the wedding vowed in July 2019. The pair walked down the aisle at the Hyde Park United Methodist Church in Tampa, Florida.

Josh and Lauren’s family members, relatives and friends attended their wedding event. For the big day, the bride Lauren wore an A-line simple silk wedding gown by Elizabeth Fillmore. On the other hand, the groom, Josh, chooses to wear a black tuxedo, a white shirt, and a black bow tie.

Since the wedding day, Mr. and Mrs. Swickard have shared a healthy bond as perfect married partners. The couple visits many exotic places, attends public events, and shares pictures on their social sites. Additionally, the matched pair are soon celebrating their third wedding anniversary in July 2022.

Josh and his wife Lauren shared an adorable baby girl from the marital solidarity. The married couple took an Instagram to reveal the pregnancy on February 17, 2021. Josh wrote, “#Girldad so excited for this next chapter of life @laurenswickard let’s go.”

Later, Lauren gave birth to the couple’s first baby Savannah Kaye Swickard on April 2, 2021. As of now, Savannah, 1, is living a healthy and limelight life with her celebrity parents. Like, Zoie Laurel May Herpin, she is also earning fame as a celebrity daughter.

As of now, Lauren and her husband Josh are jointly parenting their daughter. Savannah is often seen on the post updated by her mother, Lauren and father, Josh, on their respective Instagram accounts.