Skip to content
Home » Entertainment » Who is Chris Rock? A stand-up comedian got slapped At the 94th Academy Awards show.

Who is Chris Rock? A stand-up comedian got slapped At the 94th Academy Awards show.

Will Smith slapped comedian-actor Chris Rock after making a joke about his wife’s hair. It was an unscripted incident at the 94th Academy Awards Maybe the freshest interaction. But the way things are being harsh, people must support Chris rock. 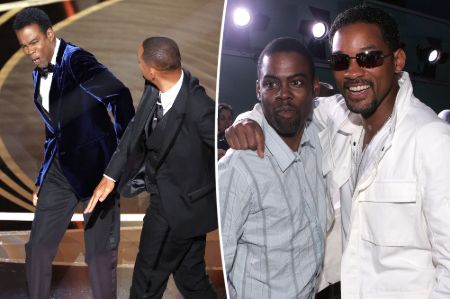 Christopher Julius Rock is an American stand-up comedian, actor, writer, producer. He is famous for his movies and tv shows like Everybody Hate Chris, The Fresh Prince of Bel-Air, Spiral and more. However, people started to recognize him for his stand-up comedy in previous years. Rock gained prominence as a cast member of sturdy Night live in the early 1990s.

Chris Rock and Will smith’s Relationship

Chris Rock and the actor had been friends before, wherein in 1995, in the sixth and final Series of The Fresh Prince of Bel-Air, Chirs rock played a double-header in the second episode as a famous comedian with Maurice Perry. Even Smith and Rock both appeared in the Spike Jonze-directed Mockumentary Torrance Rises in 1999.

However, both actors played a serve of movies together. Will Smith accepts a kids’ choice award from Chris Rock. Where Smith with the prized blimp after winning favorite voice from an animated film for his work as oscar in Shark Tale. Some media even claim that Smith used to visit Rock houses on weekends, and they got a good bond after they both used to work together.

The Statement of Chris Rock about 2022 the Oscar incident

At the 94th Academy Awards, Will Smith slapped Chris Rock when he made a joke about Smith’s wife. Smith got offended and slapped him in front of the international television 2022 Oscar stage. Chris mentioned a joke, “Macbeth,” in her hair. Also, even some Twitter users dug out an old tweet that predicted a fight between Smith and Rock.

Smith said, “Keep my wife’s name out of your f—ing mouth! Smith shouted after Rock quipped, “Jada, I love you, ‘G.I. Jane 2; can’t wait to see it” The altercation took place moments before the king Richard star took home the Oscar for Best Actor. This sense was going viral internationally in a massive way. Even more than 60 million views crossed in a Youtube name called Guardian News.

However, Night Rock published a statement saying, “As a comedian, it can be difficult to understand which lines are to be crossed and which ones aren’t, “Rock’s alleged statement read. “Last night I crossed a line that i shouldn’t have and paid the enormous price of my reputation as a renown comedian.” People started to mock Smith after Rock’s statement about the incident.

Will Smith Apologizes to Chris Rock

After the 94th Academy Awards incident, Smith posted a picture where he apologized to everyone, including Chris rock. He said,” Violence in all of its forms is Poisonous and destructive. My behavior at last Night’s Academy Awards was unacceptable and inexcusable. Jokes at my expense are a part of the job, but a joke about Jad’s medical condition was too much for me to bear and i reacted emotionally.”

Some media claim that they are all done just for making a show popular, but as we know, it can’t be right as we see his apology statement. Even after a smith post, people didn’t stop criticizing him. He had to disable his comment section of that post for just a minute, he posted a picture, but Rock’s next show’s tickets are going on sale in an enormous amount on another side.

The incident happened at an award show where Smith posted an apology to Chris. But on Twitter, while answering fan questions, Tony Rock said he would not accept the apology after what Smith did to his brother. Even someone said that “This is not real, right? where he replied, “Fake or what?.” Likewise, everyone said they wouldn’t accept either in the comment section.

Tony is also a stand-up comedian, just like his brother. Also, he did confirm that Chris Rock and will sSmithhave no made-up on the Night of the Oscars. In a recent post on Twitter, he said by the side of Smith that “Be sure to watch ‘Good Hair’ since the narrative is ow changed to all my bro does is disrespect women of color.”

When people defend him, christ tells Jada that she looks like Gi Jane with her bald head, which she does. In that statement, people, Jada, haven’t reacted yet. But the way things are being harsh, she must come to the media in a few days.

For more exciting gossip, do visit our favebites.