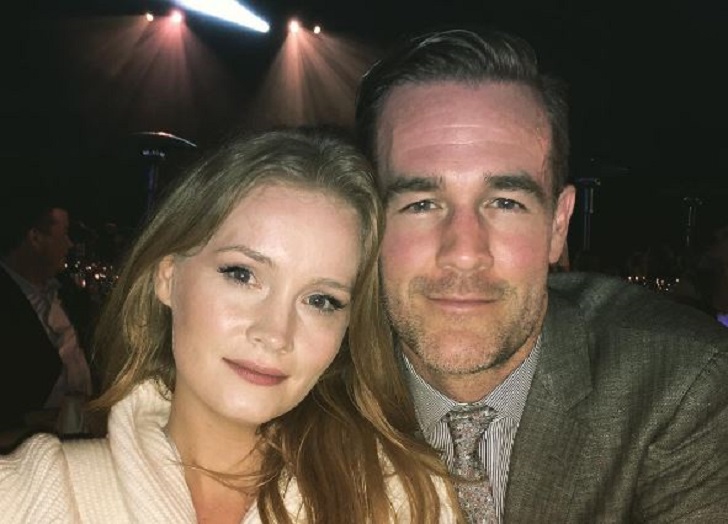 Kimberly Van Deer Beek, born Kimberly Brook, who celebrates her birthday on March 22, is popular for uploading pictures showcasing her lifestyle on Instagram. Besides, Kimberly has appeared in the TV mini-series Home Movie: The Princess Bride. Likewise, she has worked as an associate producer in the 2010 documentary film Teenage Paparazzo.

Kimberly began living a celebrity life and getting media recognition after sharing her marital life with James Van Der Beek. Her boyfriend-turned-husband James is no other than a well-established actor famous among the public for his best performances in movies and TV shows.

Scroll below to get the detailed information regarding Kimberly and James’ married life. How many children do they share? Know about it in the following sections.

As noted above, Kimberly’s hubby James William Van Der Beek is a successful American actor. The New Haven County, the Conneticut native, Van Der Beek, a Drew University graduate, has been vigorously taking his acting career to the next level since 1992.

The MTV Movie Awards-winning James Van Der’s other featured movies and TV series are CSI: Cyber, Carters Get Rich, Vampirina, The Rules of Attraction, How I Met Your Mother, Varsity Blues, etc. Likewise, James was also a participant in the 28th season of Dancing With the Stars, where his dancing partner was Emma Slater.

Kimberly and James first met in 2009 in Israel. After their first encounter, Van Der Beek and Brook started their intimate relationship. Following six-months long dating, Kimberly and James began “living together.” Since then, they have been sharing an inseparable bond.

James fell in love with Kimberly at the moment of their meeting. He was pretty sure to get married to her. On August 2, 2019, James shared throwback pictures of them enjoying a beach in Tel Aviv, Israel, on his Instagram, saying, “About four days after @vanderkimberly and I met. At this point, I pretty much [we] knew were going to get married. I think she knew it, too and she was not happy about it. * Yet.”

The 45 aged Pose actor James Van and Kimberly exchanged their wedding vows after a year-long romantic commitment on August 1, 2010. The pair decided to take their relationship to the next level by marrying in the same country they first met.

Kimberly and James walked down the wedding aisle in a small private ceremony in Kabbalah Center, Tel Aviv, Israel. They married privately, so the details regarding their marriage are lacking.

However, as of now, James and his wife Kimberly are sharing a good marital bond and living a healthy marital relationship. Mr. and Mrs. Van Der Beek also share appreciation posts, wishes on birthdays and anniversaries, and images with their family on their official Instagram handles. The married pair have celebrated their 11th wedding anniversary.

Know the marital details of another Dawson’s Creek actor Joshua Jackson and his wife, Jodie Turner-Smith.

To wish wife Kimberly on their 11th marriage anniversary, James wrote, “Doesn’t seem like 11 years. In so many ways, you still feel like a new beginning to me. We’ve been through so much life already, through so many phases of consciousness and personal evolution, and the growth continues! There’s no one I’d rather begin a new with, grow old with, or just lay around in bed with. I love you.”

In October 2019, Kimberly announced her sixth pregnancy. But, they lose their baby due to her miscarriage. Again in September 2020, Kimberly and her husband James announced them expecting their sixth child together. Later, on November 22, 2021, Kimberly gave birth to their sixth baby Jeremiah Van Der Beek. James announced Jeremiah’s birth, writing, “Humbled and overjoyed to announce the safe, happy arrival of Jeremiah Van Der Bee. (We’ve been calling him Remi, btw – not “dinosaur”).”

As of now, the Van Der Beek family of eight is living happily in Texas. The Van der Beek siblings are also gaining media attraction as celebrity children. Kimberly and her spouse James often travel with their kids and never miss a chance to share pictures on their social sites.

For Further Updates On Your Favorite Celebrity Wife and Entertainment Personality, Stay Tuned With Favebites