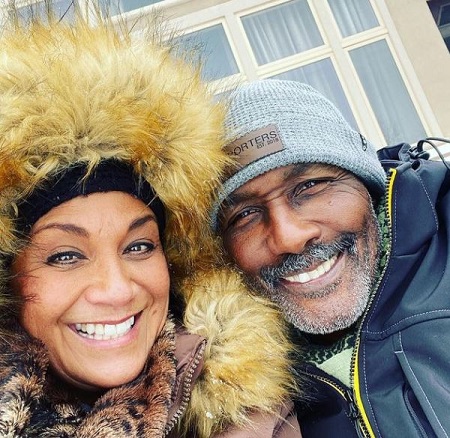 Kay Kinsey is a former model known for her presence in a beauty pageant. Kinsey is the winner of the 1988 Mis Idaho USA pageant. Besides her professional works, Kay’s prominence rises to fame after tieing the wedding knot with one of the greatest basketball players Karl Malone, aka ‘Mailman.‘

From his 19-years long career as an NBA player, Malone has earned enough eminence, media recognition, and fans. Now the NBA’s Most Valuable Player (1997, 1999), Karl lives a retired player life. Like professional works, does Karl’s love life successful? Is he living a blissful life with Kay? Know about Malone and Kinsey’s marital details in the following sections.

Kay and Karl first met as a fan and stars. This fan-star relationship is changed into a loving romantic bond, leading to a blissful marital life. They had their first encounter at a shopping mall in Salt Lake City during an autograph signing. Knowing Kay is interested in player Malone, her sister Sharon sends a picture of Kay and a letter to Karl.

Later, Malone also starts sending letters to Kay. Afterward, they meet one another and begin their romantic affairs. Following a year-long dating, Kay and Karl exchanged wedding vows. The lovely duo tied the wedding knot in an intimate wedding ceremony on December 24, 1990.

The detailed information regarding their lack as they walked down the aisle privately. As of now, Mr. and Mrs. Malone share a good bond as a perfect married partner. The married duo celebrated their 32nd marriage anniversary blissfully.

Kay took an Instagram to wish her husband Karl their three-decade-long wedding anniversary. She captioned the image saying, “Happy Anniversary to us. 32 yrs of laughter, happiness, joy, tears, and specially LOVE. Our family is getting bigger, but our LOVE is getting stronger.”

Kay shares three adorable daughters and a son with her spouse Karl from a strong marital bond. They became parents for the first time on November 8, 1991, sharing a daughter, Kadee Malone. Similarly, their second daughter Kylee Annie Malone was born on April 7, 1993.

Likewise, Kay and Karl’s third kid, Karl Malone Jr. “K.J” was born on May 8, 1995. Moreover, they became parents for the fourth time in 1998, welcoming a daughter named Karlee Alyeah Malone. Karlee is a model for the agencies AMAZ Agency and Sports+Lifestyle Agency. The 24 aged Karlee is engaged to get married to her partner Brent Diaz.

The former Utah Jazz power forward Karl’s eldest daughter Kadee is a businesswoman. The 31 aged Kadee merch CBD, CBG, and CBN-based skincare and lifestyle products. Kadee is in a marital relationship with her husband, Cedric Johnson.

On the other hand, Kay and Karl’s only son Karl Jr is also a former basketball player. He played as an offensive tackle Louisiana State University (LSU) football team. Karl Jr graduated from Cedar Creek High School. The 27-year-old Karl Jr has not been involved in a romantic relationship.

Kay and Karl are also blessed with an adorable granddaughter. Their grandkid is from their second daughter, Kylee Annie, the owner of Smilee Kylee. The 29 aged Kylee is engaged to her boyfriend, Joey Lopez.

Kylee gave birth to their daughter Giselle Aline Lopez, aka Gigi, in September 2020. The 1year old Giselle is living a limelight life with her parents. She is also identified as the first grandkid of popular NBA player Karl Malone and his wife, Kay Kinsey Malone. Additionally, Gigi features on most of the posts updated by Kay on her official Instagram account.