Who is Tavior Mowry Dating? Girlfriend’s Name and Details 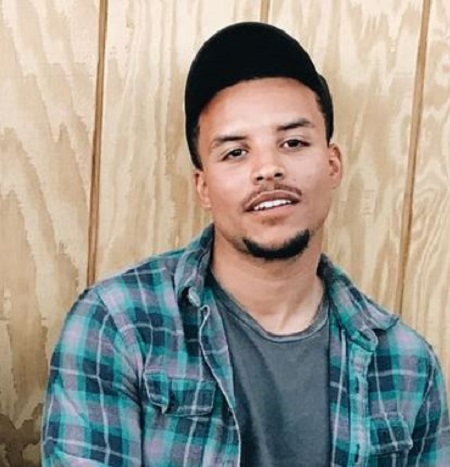 Tavior Mowry is a rising American singer and songwriter struggling hard to pursue a better career in the music industry. Besides, Mowry is also identified as the youngest brother of popular actor Tahj Mowry and actress Tamera and Tia Mowry.

Tavior, also known as, Dontae Adisa, has released songs such as Flick, Get Away, Big Sky, Diddy Bop, Orange & Vanilla. After a successful Collge Football career, Tavior is pursuing his career in the music field. These are some of Mowry’s professional works indications.

But what about his love life? This handsome hunk is dating someone, or is he already a married man? Know about his romantic life in the following sections.

Zandya and Tavior first met in 2018 in Los Angeles. After the first encounter, the duo shared a good bond as a friend and soon began their romantic affair.

Following a two-year-long romantic relationship, Tavior and Zandya engaged. The 28 aged Mowry got down to one knee and proposed to Zandya in July 2020 with a Marquise diamond ring. She also excitedly accepted his proposal.

Fitzgerald revealed the news of her engagement via Instagram, captioning, “Two and a half years ago we ate ramen together as strangers and now we’re PREPARING TO GET MARRIED. What a ride.”

Walked Down The Aisle In An Intimate Ceremony

Afterward, without any delay, on September 9, 2020, this lovely duo tied the wedding knot. They exchanged the vows in an intimate ceremony at Graystone Quarry in Nashville.

Zandya and Savior’s family members, close friends, and relatives attend their wedding reception. Additionally, they declare the news of their wedding via Instagram posts.

Tavior shared a wedding picture captioning, “I’m BLESSED beyond measure and I’m GRATEFUL that you said “Yes” to me on 9/21/20 and that you have continued to say “Yes” every day since. I love you Z. 10 out of 10 would recommend.”

On the big day, bride Zandya wore a backless high-neck wedding gown that featured a short veil. On the other side, groom Tavior chooses a black tuxedo to walk down the aisle.

From the wedding day, Mr. and Mrs. Mowry shares a good bond as a perfect married partner. Their romantic bonding can be seen on Zandya’s social media posts.

Like Tavior, his beloved wife, Zandya Fitzgerald, is also a musician. The 26-years-old Zandya is the daughter of Daryl Fitzgerald (father) and Stephanie Fitzgerald (mother).

Zandya is a member of an American band, The New Respects. Fitzgerald is the songwriter and guitarist of the band. Other band member includes Jasmine Mullen, Lexi Fitzgerald, and Darius Fitzgerald. Additionally, Lexi and Darius are the siblings of Zandya.

The band released their first EP, Here Comes the Trouble, in 2017. Similarly, their first studio album is Before the Sun Goes Down (2018).

The albums include songs such as We Ain’t Goin’ Nowhere, Trouble, Something To Believe In, Say What You Want, and No Drama.