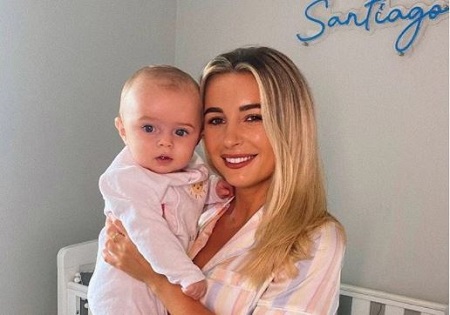 The Newham, London native Dani Charlotte Dyer is a reality star, Television and social media personality and author. Dani is famous as the winner of the fourth season of the dating reality show Love Island. Dyer has made her appearance in movies and TV shows such as Age of Kill, Survival of the Fittest, etc.

Dani co-presented the show True Love or True Lies with her father, Danny Dyer. The father-daughter duo also hosts a podcast called ‘Sorted with the Dyers.’ Dyer is living a successful professional life, from which her love life details are also curiously searched in the media. Dani is the mother of one, and everyone rarely knows who the child’s father is. Is Dani still in the relationship with baby daddy? Know about it in the following sections.

Re-Kindled With Ex And Welcomed A Baby Boy

Dani won Love Island (season 4) with Jack Finchman, but their relationship did not last long, less than a year. Before joining the reality show, Dani was in a romantic relationship with her boyfriend, Sammy Kimmence. After parting ways with Jack, Dyer re-kindled her relationship with Sammy on April 23, 2019, as per The Sun.

The 25-years-old reality star Dani and Kimmence reunited after an on-and-off romance, and her dad Danny previously disapproved of their relationship, saying, “He’s not for you, babe.”

Dani and Sammy, a stockbroker, began sharing a good bond following the re-unity. On July 28, 2020, Dyer revealed her first pregnancy with beau Sammy on Instagram.

Sharing an ultrasound picture of the baby, Dani wrote, “Little bubba can’t believe you are going to be ours. Me and Sammy are so excited to start this next chapter in our lives, feel so lucky and grateful. 2021.” Later, Survival of the Fittest cast, Dani gave birth to their son Santiago on January 23, 2021. As of now, Santiago is living merrily with her mother, Dani. He often features on the post updated by Dani on her official Instagram account with more than 3 million followers.

Is Dani Dyer Still In Relationship With Baby Daddy?

No, the Vendetta actress Dani is no more in a romantic relationship with Santiago’s father, Sammy. Dani and Sammy briefly ended their relationship in March 2020 after Sammy was accused of scamming two men with £34,000. The couple later got back together in April 2020 and spent their COVID-19 lockdown together.

However, the ongoing accusations process at Portsmouth Crown Court, UK, announced the arrest order of Sammy and jailed him for 42 months in July 2021. Dani decided to move on and concluded the relationship upon hearing the court judgment. As of now, Sammy is spending time in prison, and Dani is busy with her motherhood.

The reality star Dani is in a romantic relationship with Jarrod Bowen. The 25-years-old Dyer’s beau Bowen is a professional football player. Jarrod plays as a forward for West Ham United of the Premier League. The 5-feet-9-inch (175 cm) tall Jarrod previously played for Hereford United and Hull City.

How and when Dani and Jarrod met one another is unclear. But, Dyer and Bowen’s romance rumours sparked after they were seen spending time together. Dani confirmed her relationship with a player in December 2021, sharing pictures with him on Instagram.

Dyer also spoke about her ongoing romance with father Danny on their podcast. Danny is also happy with his daughter Dani and Jarrod romantic union. On December 5, 2021, actor Danny shared picture of Dani and Jarrod on his Instagram account, saying, “If Carlsberg made son in laws.“