Skip to content
Home » Entertainment » Who is Thea Glimsdal Temte?: A Timeline of Glimsdal’s Relationship. 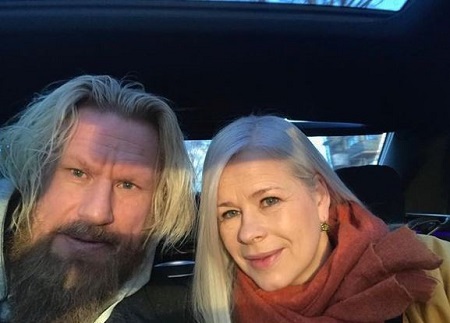 Thea Glimsdal Temte is a Norwegian fashion designer. She is a designer and general manager at a clothing store, ‘Hot Nok‘ in Solberglva, Norway. Thea’s official Facebook account shows she is a freelance reconstruction at Norwegian Institute for Bunad and Folk Costume.

Concerning education, Thea graduated from Valdres High School. Later, she studied at the University of Oslo. Besides the professional work, Thea is better known as the wife of actor Rune Temte. Rune is best known for starring as Ubba in the historical fiction TV series The Last Kingdom.

The designer, Thea’s prominence, rises to fame after sharing her intimate life with Norwegian actor Rune. Unlike other celebrities, Thea and Rune are very secretive about their marital life.

How and when Thea and Rune met one another is unclear. It looks like they are a teenage couple who still share a healthy and smooth romantic bonding. But, as per Thea’s Facebook post, it seems like they have been together since 1984. On February 16, 2021, she shared an adulthood picture of herself and Rune, captioning, “In 1984, 18-years-old.”

The Captain Marve actor Rune walked down the aisle with his long-time partner Thea in August 2001. The detailed information regarding Thea and Rune’s marriage is missing as they tied the knot privately. On August 23, 2011, she shared an image with Rune that reads, “10 years wedding anniversary at Credo in Trondheim.“

Mr. and Mrs. Temte are soon celebrating their 21st (more than two decades) marriage anniversary. The husband-wife duo shares a healthy bond as a perfect married partner without involving in any rumors related to the separation.

Rune and his wife Thea are living a blissful marital life. The married pair travels and sometimes attends public events together. On November 15, 2021, Thea and her husband Rune attended the premiere of ‘A Boy Called Christmas.‘ In the British fantasy film, Rune has played the role of Anders.

The 6-feet-3-inch (191 cm) tall Rune and his spouse shared a boy from the marital relationship. Their son’s name is Martinius Glimsdal Temte.

Martinius’ exact birth year is missing. However, like other star kids, he is also earning fame as a celebrity son. Martinius attends a public program with his parents. On June 15, 2018, Martinius, Thea and Rune attended the premiere of the superhero film ‘Ant-Man and the Wasp,’ at El Capitan Theatre.