Skip to content
Home » Entertainment » Who is Vicki Gunvalson Dating in 2022?, Vicki was engaged to Steve Lodge

Who is Vicki Gunvalson Dating in 2022?, Vicki was engaged to Steve Lodge 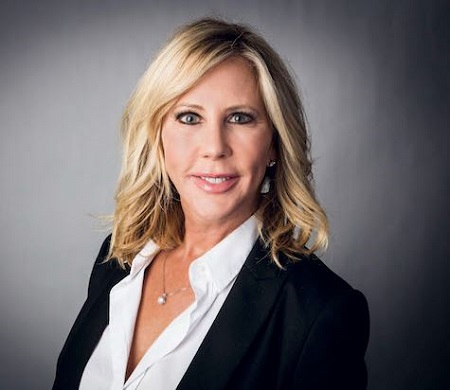 The entrepreneur Vicki Gunvalson is recognized for starring in the Bravo reality series The Real Housewives Of Orange County (RHOC). Gunvalson starred as the main cast of the television show. Vicki is the founder of the financial services company Cotto Insurance, Irvine, California.

The television personality and businesswoman Vicki lives a successful professional life. But, what about her personal life? Is Vicki currently dating someone, or she lives a single life? Know about her present and past relationship status in the following sections.

The RHOC cast Vicki, 59, has not revealed her current relationship to the media. However, it seems like she is dating a mysterious man. As a guest in ‘Two T’s in a Pod with Tamara Judge and Teddi Mellencamp,’ Vicki said, “I’m on my fourth date with a guy from Chicago with the matchmaker.’‘

Gunvalson did not mention who the man is, but it seems like her mysterious man is a Midwestern guy. Vicki mentioned the qualities she is looking for in his man on the podcast. She said, “he must be from age 55 to 63, must love Jesus, a family man, someone who adores me, self-sufficient, like to travel. She added saying, “A Midwestern guy who respects me, committed, non-lying and confident.”

The Coto Insurance President Vicki was engaged to Steve Lodge, a former police officer. Gunvalson and Lodge first met in Anaheim, California, at the Boys & Girls Club charity event in 2016. After the first encounter, Vicki and Steve shared a good bond.

Later, they began their romantic affair without any delay. Following three-year-long dating, Steve proposed to Vicki with an engagement ring in April 2019. She revealed the news of her engagement with Lodge via an Instagram post. Lodge and Gunvalson celebrated their engagement in Coto Valley Country Club with a cowboy-themed party.

Everything was fine; Vicki and Lodge shared a good bond as a perfect partner. However, they ended their relationship in September 2021 after two years as fiancee and fiance. They confirmed their called-off via Instagram post. The exact reason behind their separation is unclear. But, some sources claimed that Steve cheated her whole they were in a relationship.

Before Steve, Vicki was a married woman. Gunvalson faced two unsuccessful marriages. She tied the wedding knot with her first husband, Michael J. Wolfsmith, in 1982. Vicki and her then-husband shared two children from the marital relationship, Briana Wolfsmith Culberson and Mike Wolfsmith.

Vicki’s daughter Briana is married to her husband, Ryan Culberson. They are parents to three sons. Vicki and her first husband divorced in 1991 after nine years of marriage.

Similarly, Vicki’s second marriage was with Donn Gunvalson. They walked down the aisle in 1994. However, like the first marriage, her relationship with Donn did not mean forever. Mr. and Mrs. Gunvalson partitioned their relationship in 2014. Additionally, they did not share any kids.