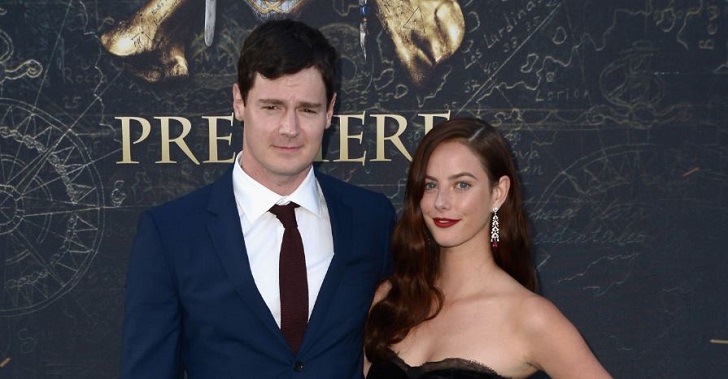 Benjamin Walker is a well-known name in the entertainment industry. Walker has grabbed huge media attention and an enormous fan following with his incredible acting skills. The Cartersville, Georgia, native Benjamin has been actively involved in acting since 2004. He started his career by working in playing in theatrical shows.

Benjamin was born on June 21, 1982, and earned a Bachelor in Fine Arts (BFA) degree from Juilliard School in New York. Walker is popular for playing Abraham Lincoln in the supernatural horror film Abraham Lincoln: Vampire Hunter.

From his decade-long professional acting career, Benjamin not only earns prominence but undoubtedly gathers an impressive sum of wealth. He has an approximate net worth of $6 million. Let’s find the detailed information regarding Walker’s Love Life in the following sections.

The 6-feet-2-inch (188 cm) tall Benjamin’s beloved wife, Kaya Scodelario, has also established herself as one of the most talented and beautiful actresses. If you have watched the world-famous film Pirates of the Caribbean: Dead Man Tell No Tales, then Kaya will not be your new name.

In the swashbuckler fantasy film, Scodelario played the leading role of Carina Smyth Barbossa. The movie collected $794.9 million in its box-office collection under a production budget of $320 million. For the movie, Scodelario also received a Teen Choice Award nomination.

The Hollywood actor Anthony De La Torre is also known for playing in Pirates of the Caribbean: Dead Man Tell No Tales.

The 5-feet-6-inch (168 cm) tall British Actress Kaya’s other film credit includes Maze Runner: The Scorch Trials, The Truth About Emmanuel, Wuthering Heights, Resident Evil: Welcome to the Raccoon City, etc. Likewise, Kaya has made her appearance in TV series such as Skins, Spinning Out, The Pale Horse, Southcliffe, and others.

Jessica Jones actor Walker’s involvement in the entertainment field helped him find a perfect match for Life. Benjamin and Kaya had their first encounter while working together in The King’s Daughter, a film based on The Moon And The Sun novel, in April 2014. The movie was released on January 21, 2022, where Benjamin portrayed Yves De La Croix, and Kaya played the role of Marie Josephe.

After the first meeting, Walker and Scodelario maintain a good friendship until they fall for each other. Following two months-long friendship, they begin their romantic relationship. In an interview with InStyle Magazine, Kaya said, “We were originally friends, then after two months of shooting, we both said, Ok, I really like you.”

In December 2014, Kaya shared a picture with her mother, Katia Scodelario and Benjamin on Instagram, where we can see the diamond ring sparkling on her finger. But, she did not reveal the news of her engagement. Later, on January 25, 2015, Scodelario shared photos of her ring, flaunting the ‘Ben‘ tattoo on her engagement finger.

Took The Relationship To The Next Level In 2015

The Maze Runner Actress Kaya and All My Sons (musical) actor Benjamin married after a few months of engagement. In March 2015, Kaya and Benjamin received their marriage license from the marriage license bureau at New York City Town Hall.

Later, in December 2015, the duo celebrated their wedding. Their close friends and family members attended their intimate wedding ceremony held in England. Kaya wore a plunging, thin, strap gown designed by Vera Wang to walk down the wedding aisle. She paired it with a short veil and carried a white flower with leaves bouquet. On the other side, Benjamin wore a black tuxedo and a white shirt on the big day.

Kaya shared the wedding news via Instagram on December 30, 2015, sharing an image of the bride and a groom’s wedding cake, writing, “Happy New Year everyone… Here’s to 2016 being filled with Love, Laughter and cake for everyone!” She shared the pictures from her wedding in January 2016.

After the wedding, Benjamin and Kaya embraced the surname Scodelario-Davis. As of now, Mr. and Mrs. Scodelario-Davis share a healthy marital relationship. The married pair have already celebrated their 6th wedding anniversary. The Notorious Bettie Page cast Walker, and The Tiger House Actress Scodelario attends many public events together.

Benjamin and his wife Kaya shared two adorable children from the strong marital solidarity. On June 7, 2016, Kaya revealed her first pregnancy news saying, “I love you @findthewalker. I love our little family, ” sharing a picture of them holding Kaya’s baby bump with their pet dog.

Later, Benjamin and Kaya welcomed their first child, a son, in November 2016. The little Scodelario-Davis’ name is unavailable.

Similarly, on September 18, 2021, Kaya announced they were expecting their second child. On November 29, 2021, showcasing a big baby bump, she attended The Fashion Awards 2021 at the Royal Albert Hall in London. Kaya gave birth to their second baby in January 2016.

Kaya chooses Instagram to share the news of their second baby’s birth. Sharing the picture with a newborn baby, she wrote, “You made it here, little one. Starting the new year with so much Love in our hearts & in our home. Plus poop and puke, lots of that too.” Currently, Kaya and her husband Benjamin are jointly parenting their kids. Unlike other star kids, their five-year-old son and his younger sister are kept far from the media attention.