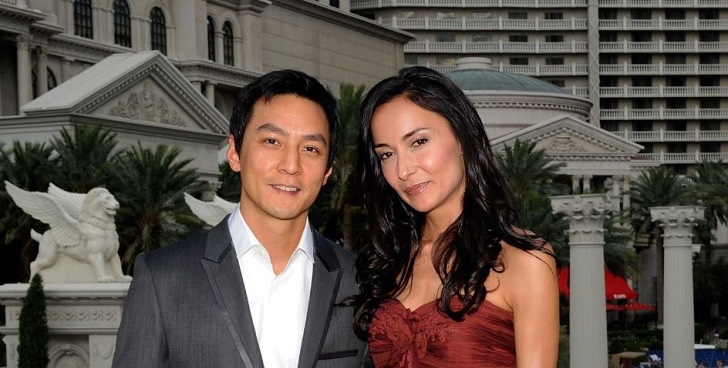 The University of Oregon graduate Daniel Wu is an actor and filmmaker. Wu is widely gaining popularity for his appearance in Hong Kong films. Wu is also featured in several American movies and TV shows. The Berkeley, California native Daniel has been a film industry member since 1998.

Daniel was born on September 30, 1974, to his father, George Wu and his mother, Diana Liu. Daniel is famous for playing the leading role of Lu Ren in the 2018 action-adventure film Tomb Raider. Similarly, Wu’s role in the Hong Kong action film New Police Story is also appreciable. Daniel also received Golden Horse Awards for Best Supporting Actor for the movie.

From his two-decades-long professional acting career, Daniel not only receives media attention and fan following, but he also gathers an impressive sum of wealth. The 5-feet-11-inch (182 cm) tall Daniel has an approximate net worth of $20 million. How is actor Wu’s marital Life with wife Lisa S going? Know about it in the following sections.

The 47 aged actor Daniel is in a blissful marital relationship with Lisa Selesner, aka Lisa S. Wu’s wife Selesner is a fashion supermodel with experience promoting various fashion brands and working with famous fashion houses and modeling agencies. Lisa has been featured on the cover of ELLE Magazine.

Their Married Life Since 2010

Lisa and the Born Wild actor Daniel began their romantic relationship in 2002. They tied the wedding knot after eight years of dating on April 6, 2010. Their private wedding ceremony was held in South Africa’s Forest.

On the big day, the bride, Lisa, wore a silk strapless gown and the bridegroom Daniel chose a black tuxedo to walk down the wedding aisle. As of now, The Heavenly Kings actor Daniel and his wife Lisa are living a blissful marital Life. Mr. and Mrs. Wu have already celebrated their 12th (more than a decade long) wedding anniversary.

On April 6, 2020, Daniel shared an old picture from their wedding on Instagram to wish his wife, Lisa, their 10th wedding anniversary. He wrote,

“On this day, ten years ago we were married in this little bit of forest in South Africa. We’ve been legal for 10 but together for 18 years! My what a journey it’s been! Thank you for being my partner, my light, my best friend and most importantly a wonderful mother to our little turd. Love you babe! #10yearanniversary.”

Daniel and his spouse Lisa share an adorable baby girl from the strong marital union. On December 2, 2012, Lisa broke her pregnancy news, saying, “To friends, fans, and media. I would like to publicly announce that my husband, Daniel, and I are pregnant with our first child and will be expecting in early June next year. Thank you for all your past wishes and concerns. We look forward to starting this next exciting chapter in our lives!“

Lisa and Daniel welcomed their daughter Raven Wu on June 3, 2013. She shared the news of Raven’s birth via Instagram, writing, “We would like to announce the birth of our healthy baby girl Raven Wu. A couple has now become a family. We are so excited to begin this new journey in our lives!“

As of now, Daniel and Lisa are jointly parenting their nine-year-old daughter. Unlike celebrity daughter Blake Lively Inez Reynolds, Raven is kept far from the spotlight and media attention. They rarely shared pictures with Raven on their social sites.

On June 1, 2022, Daniel wishes on his daughter’s 9th birthday saying, “My favorite person in the world turned 9 yesterday and she got her ears pierced. The past 9 years has passed so quickly, and she is growing so fast. Her growth excites me but also makes me feel sad that my little baby is no longer my little baby! sigh.“

Daniel is one of the successful actors who has been ruling the film industry through his incredible acting skills. He made his acting debut in 1998 by working in films Bishonen, the City of Glass, Young and Dangerous: The Prequel.

To date, Wo has featured in movies such as Gen-X Cops, 2000 AD, Beauty and the Breast, Devil Face, Angel Heart, One Nite in Mongkok, Around the World in 80 Days, Everlasting Regret, Blood Brothers, The Founding of a Party, The Last Supper, Don’t Go Breaking My Heart 2, Go Away Mr. Tumor, and others.

Similarly, Daniel’s TV series credit includes Into the Badlands and Skylanders Academy. Likewise, he is portraying a leading role in an upcoming action-comedy film America Born Chinese. Also, Daniel has been credited as a producer in Tai Chai 0, Tai Chai Hero, Control, The Heavenly Kings, Like A Dream, etc.

Wu has also made his appearance in box-office hit movies. The action fantasy film Warcraft collected $439 million in its box-office collection under the production budget of $160 million, where an actor Daniel has played the role of Gul’dan. Similarly, Tomb Raider made $274.7 million under the $106 million production budget. For the information, Actresses Alicia Vikander and Camilla Luddington have also played the character in the movie.

Furthermore, with a production budget of $130 million, the 2017 science fiction disaster film Geostorm gathered $221.6 million at the box office. The actor Daniel played Cheng Long in the film.

Favebites is publishing interesting articles about your favorite film and TV stars. So, stay tuned with us.