Case Walker is a television movie actor who appeared in the Comedy Central TV series, The Other Two in 2018. But he first gained popularity on TikTok, with over 2 million followers. Apart from acting, Walker is interested in singing, dancing, and playing the piano. 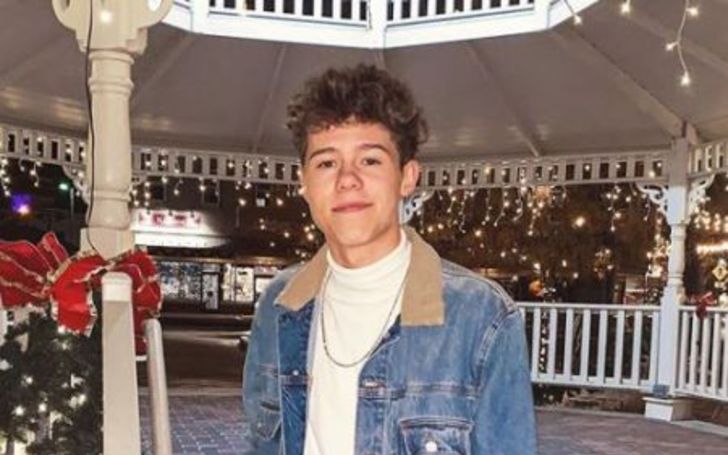 Case Walker is a television movie actor who appeared in the Comedy Central TV series, The Other Two in 2018. But he first gained popularity on TikTok, with over 2 million followers. Apart from acting, Walker is interested in singing, dancing, and playing the piano.

The young star, Case, was born on February 25, 2003, in Albuquerque, New Mexico. He has two brothers named Jess and Cole. His older brother, Jess, made USA Climbing Nationals. Likewise, his younger twin brother, Cole, is an Instagram star. Case and his family later moved to Colorado.

As of 2020, the 17-years-old Case is single, and he doesn’t have a girlfriend. Moreover, he is focused on his career instead of being committed to a serious relationship.

Case has been linked up with a few girls before, but he has never confirmed his romance. Like fellow TikToker, Bella Cuomo, Walker is also enjoying his singlehood.

The TikTok star was previously linked up with Danielle Cohn. The two collaborated on Shawn Mendes‘ hit song, Treat You Better, in 2017. However, Case and Danielle are just two good friends. Likewise, Case was also rumored to be dating actress Madison Lewis.

Walker still has a lot to achieve in the entertainment industry. Despite being a social media star, he wants to make it big on the big screen. To date, Case hasn’t revealed his dating status. He is probably single, but he might be waiting for the right partner.

Why is Case Walker Famous?

As mentioned earlier, this young boy is popular for his social media accounts. He is particularly famous on TikTok, with over 130 million hearts on his verified account. Similarly, his official Instagram account has 417k followers as of July 2020.

With his growing fame on social media, Case then bagged a leading role in the Comedy Central television series, The Other Two, in 2018. Apart from acting, he enjoys singing and dancing. Additionally, Walker has participated in several rock climbing competitions.

His twin brother, Cole, is also an Instagram star, and the duo has appeared together in several of Case’s TikTok videos. Further, Case has a self-titled YouTube channel with over 17k subscribers.

Net Worth Of Case Walker

TikTok star and actor Case Walker’s exact net worth is not available. As of 2020, he might have an estimated net worth of $50,000.

Case has official merchandise selling sweaters, t-shirts, hoodies, and cats. The prices of the products range from $20–$50.

Case has yet to give a blockbuster on a big screen. His fans appreciate his performance on television. Also, he is still young and has a lot of time to work on himself. Like any other teenage boy, Case likes to enjoy his life.