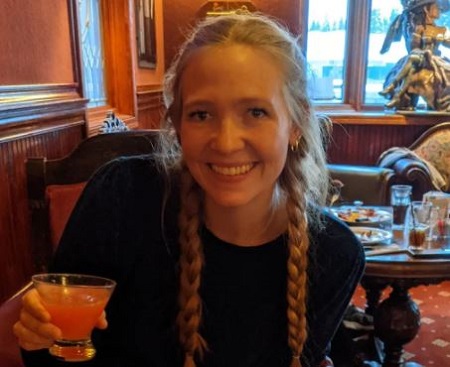 Aspyn Brown is a celebrity kid. She is one of six children of the reality stars Christine Brown and Kody Brown of Sister Wives. Aspyn has also made her appearance in the reality TLC reality series.

Aspyn now lives a celebrity life. Brown is gaining celebrity recognition. Here are some interesting facts you need to know about Aspyn. Read the article till the end.

Aspyn Brown Is Married To Her Boyfriend Mitch Thompson

The 26-years-old Apsyn is in a blissful marital relationship with her husband David Mitchell Thompson, aka Mitch. The detailed information regarding Mitch’s professional work is missing.

Aspyn and David Mitchell first met in her parent’s house at a party. After the first encounter, Brown and Thompson shared a good bond and soon began their romantic relationship. Following several months of dating, David proposed to Aspyn in early 2018. He announced their engagement via Instagram post.

On February 19, 2018, Mitchell shared a picture with Aspyn captioning, “Night out with my beautiful fiancee.”

After three months-long engagement, Mitchell and Aspyn decided to take their relationship to the next level. On June 17, 2018, the duo exchanged wedding vows. The intimate outdoor ceremony was held at La Caille restaurant, Utah.

The bride chooses to wear a sleeveless satin gown designed by Alfred Angelo on her big day. On the other hand, the groom, David Mitchell, wore a white shirt, black waistcoat, coat, a blue tie and a kilt with black socks and shoes.

Since the wedding day, Mr. and Mrs. Thompson share a healthy bond as a perfect married duo. The married duo is soon celebrating their fourth marriage anniversary.

After completing high school, Aspyn attended the University of Nevada-Las Vegas in 2013. She graduated with a degree in Marriage and Family Therapy, Counseling in 2019.

Likewise, at Kendra Scott, Aspyn served as Store Manager for 1-years from November 2020 to November 2021. Moreover, Aspyn was an intern at Communications in the School of Nevada and Alzheimer’s Association.

Christine Brown is one of the third wives of Kody Brown. All of them, including their 18 children, have been featured in Sister Wives, a reality series since September 2010. Likewise, Kody’s third wife Christine is also an author who has published Becoming Sister Wives and Hand Raised.

In March 1994, Kody and Christine tied the wedding knot. From the marital relationship, Christine and Kody shared six children. Everything was going fine; however, in April 2021, Christine revealed during the finale of the series’ 15th season, “Meri (one of the Kody’s wives), I can’t do marriage with Kody anymore.”

Later, in November 2021, Christine announced that she had ended her marital relationship with Kody. They divorce after marrying for 27-years.

After one year of marriage, Christine and Kody welcomed their first daughter Aspyn in March 1995. Following a year, she gave birth to their second daughter Mykelti Brown in 1996. The 25 aged Mykelti is married to her husband Tony Padron, with whom she shared a daughter named Avlon.