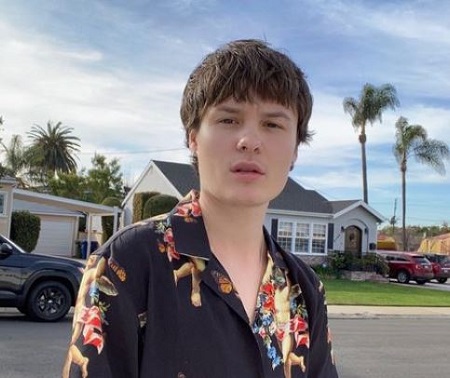 Jesse Sullivan is openly a transman earning fame as a social media star. Sullivan has more than 2 million followers on his official TikTok account. Likewise, Jesse is an actor who has made his appearance in American Satan, Enigma Of Being Awake, etc.

Moreover, Sullivan appears in the documentary ‘My Transparent Life.’ Furthermore, Jesse is now grabbing media attention after hanging out with the reality star Francesca Farago. Let’s find out more about Jesse’s personal life in the following sections.

As per the Daily Mail, Francesca and Jesse were kissing each other after dining at Olivetta, West Hollywood. The paparazzi caught them in a romantic situation in July 2021. However, Jesse and Francesca are tight-lipped regarding their relationship status.

The 32-years-old Jesse once gained popularity for his social media appearance with Teela. Teela is a former model and an Instagram star. She has represented modeling agencies such as Wilhemina Models, TCM Models, etc.

Jesse and Teela are husband and wife. On August 20, 2016, Jesse shared a polaroid picture of his and Teela, captioning, “Great start to my 27th birthday because I have the best wife ever.” However, as of now, Jesse did not share pictures with his wife, Teela.

So, it is hard to say whether the married duo keeps their marital life secret or has already ended their relationship.

From the marital relationship, Jesse and Teela shared a baby girl. Their daughter Arlo Sullivan was born on August 6, 2008, under the zodiac sign of Leo.

Jesse is raising his 13-years-old daughter, Arlo, with whom he shares a close bond. Jesse spends quality time with her and never misses a chance to share pictures with Arlo in his official Instagram post.