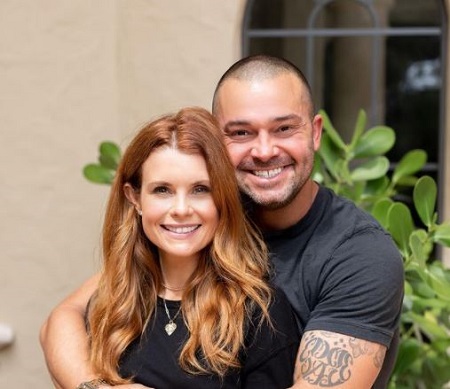 There are many Hollywood entertainers who are gaining worldwide recognition for their acting skills. Among them, actress JoAnna Garcia Swisher is also the one. She is famous for her role as Cheyenne Hart Montgomery in the TV sitcom Reba.

Not only a successful personal life, but JoAnna also lives a prosperous and blissful marital life. Her marital bond is going smooth and strong with her husband, Nick Swisher. Now, let’s read more about JoAnna and Nick’s marital details in the following sections.

There Was Not A Love At First Sight

The Once Upon A Time actress JoAnna first met her now-husband, Nick Swisher, through a mutual friend. Talking about Nick, he holds a different profession from JoAnna. The 41 aged Nick is a former baseball player of Major League Baseball (MLB).

After Nick and JoAnna’s first encounter, they began their friendship, but she was unsure regarding their romantic connection.

“It certainly wasn’t the first type of profession for a guy that I wanted to date. I didn’t think like, ‘Yea! This sounds great.’ But the second I met him, I went to go see him play a baseball game against the Mets, and I thought, Wow, he’s just refreshing, and he’s kind.”

Later, Garcia and Swisher began dating in 2009. After a year of successful dating, Nick proposed to JoAnna with an engagement ring in May 2020.

JoAnna and Nick took their relationship to the next level following five months of engagement. The couple tied the wedding knot on December 11, 2010. Their intimate wedding ceremony was held at the Breakers Hotel & Resort in Palm Beach, Florida.

Along with the bride and groom’s family members, many athletes, actresses, and actors attended their wedding. JoAnna’s bridesmaids were Melissa Peterman, Reba McEntire, and Jamie Lynn Sigler.

On the big day, JoAnna wore a floor-length strapless ball gown and a veil by Monique Lhuillier. On the other hand, Nick chooses black coat pants, a white shirt, and a black tie from Burberry London.

Since the wedding day, Mr. and Mrs. Swisher are sharing a healthy relationship as perfect married partners. The married pair has already celebrated their 11th wedding anniversary. The husband-wife duo visits many exotic places and attends public events together. Also, they share romantic pictures on their official Instagram accounts.

JoAnna, 42, and her husband Nick are the parents of their two adorable girls. In November 2012, they announced her pregnancy. Their first daughter Emerson Jay Swisher, aka Emme, was born on May 21, 2013.

Later, in February 2016, the family revealed her second pregnancy via an Instagram post. JoAnna and Nick’s welcomed their second daughter, Sailor Stevie Swisher, on June 28, 2016. As of now, the 8-years-old Emerson and her sister Sailor, 5, are living blissfully with their celebrity parent.

The Swisher sisters are also seen on most of the posts updated by Nick and JoAnna on their social networking sites.