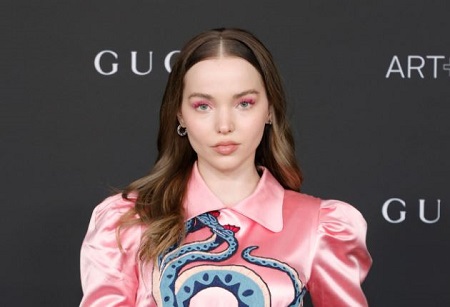 Chloe Celeste Hosterman, widely gaining popularity as Dove Cameron, is a successful vocalist and actress. Cameron’s breakthrough role is playing Mal in Descendants and its sequel. The singer Dove’s recently released single, ‘ Boyfriend,’ has crossed over 3 million views on Youtube.

Dove gathered enormous fans, followers, and limelight from her successful decade-long career. Due to Cameron’s career hype, her personal life is also the search topic. After the two failed relationships, has Dove started a new chapter of her love life? Know about her past and present relationship status below.

Whom Is The ‘Boyfriend’ Singer Dove Cameron Dating?

The 26-years-old Dove is quite secretive regarding her present relationship status. The Liv and Maddie actress has not publicly announced her love life details.

However, there is a rumor that Cameron is secretly dating Alexander. He has made his brief appearance in Dove’s music video for ‘LazyBaby.‘ As per Just Jared, Dove and Alexander first met on the set of LazyBaby. After the first encounter, the duo started sharing a good bond and began their romantic relationship.

However, Dove and Alexander are tight-lipped regarding their romantic connection rumors.

The Marvel Rising: Initiation actress Dove was previously engaged to Ryan McCartan. Ryan, 29, is also an actor and singer by profession.

Cameron and McCartan first met on the set of Liv and Maddie, a Disney Channel comedy TV series. While filming, they shared a good bond and soon started their romantic relationship in August 2013. Following three-years long dating, Ryan proposed to Dove with an engagement ring on April 14, 2016.

However, in October 2016, Dove and Ryan split after more than five months of engagement. They announced their separation via Twitter. On October 6, 2016, Ryan tweeted, “Dove has decided this relationship isn’t what she wants. We still love each other very much. Please be sensitive, as this is painful.”

In an interview with Seventeen, Cameron opened up about her and Ryan’s relationship, saying, “I was under the impression that I had to make everything look perfect all the time, and my partner definitely put that in my ear.”

Dove and Thomas are the co-stars of Disney Channel’s film Descendants and its franchise. In the movie, Doherty plays the role of Harry Hook. Addressing all the rumors, in February 2017, Dove publicly announced her relationship with Thomas.

Speaking about the relationship with People, Cameron said, “We’re dating. I’m keeping it sort of. We’re keeping it to ourselves because everything is more romantic and real when it’s yours and private.”

Despite having a strong romantic bond, Cameron and Doherty parted ways in late 2020. She announced their separation via Twitter post. Although the couple broke in October 2020, they announced two months later in December.

Yes,  Dove Cameron is bisexual. Once she stated that she is bisexual. Also, in May 2021, Dove said that she believes queer is the best way to describe her sexuality. However, as of now, she is dating anyone unknown. Also, she identifies as a feminist.