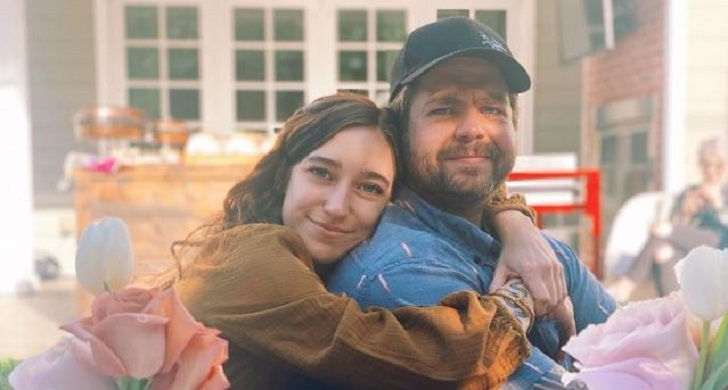 Jack Osbourne is an American/British actor and producer better known for his appearance in the reality TV program The Osbournes. As an executive producer Jack has worked in Portals to Hell, Destination Osbourne, Black Sabbath: 13, etc.

Besides the professional works, the 36-years-old Jack is widely gaining fame as a celebrity child. He is non-other than the son of legendary singer, songwriter Ozzy Osbourne. The 73 aged Ozzy was the vocalist of the heavy metal band Black Sabbath. The celebrity son Jack currently lives with his partner Aree Gearhart. The engaged pair are also expecting their first child together. Know the detailed information regarding them in the following sections.

The 5-feet-9-inch (177 cm) tall TV producer Jack is expecting a child with his fiancee Aree Gearhart. The upcoming child will be the fourth kid for Jack, as he has already shared three children with his former wife. But, soon-to-be mother Aree is experiencing her first delivery.

The newly-engaged pair (Jack and Aree) took Instagram to publicize the news of Aree’s pregnancy. Sharing a picture with Aree touching her baby bump, Jack wrote, “Exciting news!!! @seecreature and I are expecting a baby in the summer! Baby #4, here we come.”

The mother-to-be Aree is living a healthy pregnancy. She shares pictures of her baby bump on her official Instagram account. Jack and Aree are eagerly waiting and excited to welcome their baby.

Jack Osbourne And Aree Gearhart, Together Since 2019

The Ozzy and Jack’s World Detour cast Jack first met his now-fiancee Aree via a dating app. As per Aree’s Instagram bio, she is an interior designer by profession.

After the first encounter, Osbourne and Gearhart shared a good bond and soon began their romantic relationship in September 2019. Jack went public regarding his relationship with Aree in November 2019, after the duo attended the 2019 American Music Awards function.

Similarly, Aree also celebrated 2019’s Christmas Day with Jack, his parents and children. Jack proposed to Aree with an engagement ring following two years-long datings. The couple revealed the news of their engagement via an Instagram post.

Jack popped the question in December 2021, “in a magical winter wonderland,” with an oval-shaped diamond ring. Announcing the news of the engagement, Jack wrote, “Today I asked the most beautiful and loving woman I’ve ever met to marry me. She said yes!! Life is a series of doors, and I’m so excited to walk through this one with her. “

He added, “She’s truly a magical being with a heart bigger than anything I could have imagined. Her step-mom skills make my heart so full. I couldn’t be happier than I am right now.”

Already A Father Of Three Children

Before sharing an intimate relationship with Aree, the actor, Jack, was a married man. Osbourne was in a marital relationship with Lisa Stelly, an actress who has starred in Howard Stern on Demand, Passed Over.

Jack and Lisa tied the wedding knot in Hawaii on October 7, 2012. Before exchanging the vows, Jack and Lisa welcomed a daughter, Pearl Clementine Osbourne, on April 24, 2012. After marriage, their second daughter, Andy Rose Osbourne, was born on June 13, 2015.

Likewise, Lisa and Jack became parents for the third time on February 4, 2018, who shared a daughter Minnie Theodora Osbourne. The formerly married pair were jointly parenting their kids. Everything was going fine. However, they announced their separation on May 18, 2019, finalizing divorce on March 9, 2019. As of now, the Osbourne sisters are living with Jack and Aree. They shared a good bond with their step-mom, Aree.