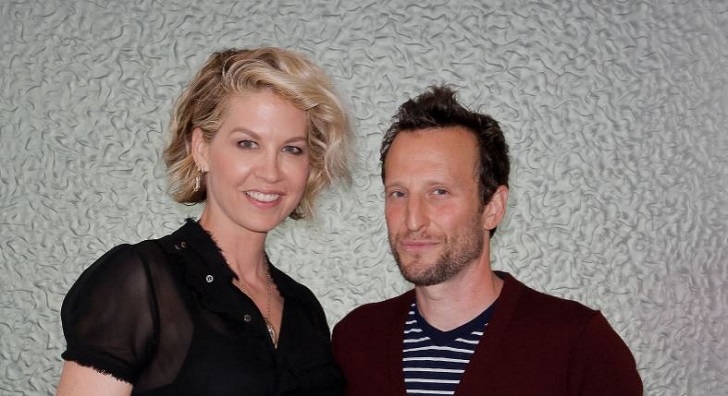 The Hollywood actress Jenna Elfman received Primetime Emmy Award nominations for Outstanding Lead Actress for Dharma & Greg. Jennifer, aka Jenna, has lived a successful acting life since 1990. The actress has made appearances in various movies and TV shows, starring alongside popular artists.

The 5-feet-10-inch (178 cm) tall Jenna’s credit includes Fear the Walking Dead, Growing Up Fisher, Keeping the Faith, Townies, etc. From the appearances, Elfman doubtlessly collects a hefty sum of wealth. She has an approximate net worth of $12 million. Likewise, Jenna has also experienced working as a producer on Accidently on Purpose, Courting Alex, and others.

Now, let’s discuss the detailed information regarding Jenna and her spouse Bodhi’s marital life in the following sections.

The 50-years-old Two and a Half Men actress Jenna is happily married to Bodhi Pine Elfman. Jenna’s spouse Bodhi is also an American actor known as the son of filmmaker Richard Elfman. Bodhi, 52, has worked in movies and TV shows such as Touch, Criminal Minds, Freedom, Collateral, etc.

Jenna and Bodhi first met in February 1991 during an audition for the commercial shoot for Sprite. After having the first encounter, Bodhi and Jenna shared a good bond and soon began their romantic relationship.

Bodhi was raised Jewish, and Jenna is of Catholic descent. However, at the time of their first meeting, Bodhi practiced Scientology. Later, Jenna also turned her religion to Scientology. As of now, both Bodhi and Jenna are Scientologists.

The actress Jenna and actor Bodhi tied the wedding knot on February 18, 1995. Their intimate wedding ceremony was held in front of their close ones. Since the wedding day, Mr. and Mrs. Elfman share a healthy bond as perfect married pairs.

Jenna and her husbnad Bodhi make a public appearance together. The husband-wife duo has already celebrated their 27th wedding anniversary. They share a healthy bond as perfect married partners. The NYPD Blue cast Jenna and Bodhi also never misses a chance to share adorable pictures on their respective social sites.

Similarly, Jenna and Bodhi have worked together in Keeping in Faith. In the romantic comedy film, Jenna has played Anna Riley and Bodhi portrayed the role of Howard, The Casanova. Likewise, the married pair also hosts Kicking And Screaming, a comedy podcast.

The Friends With Benefits actress Jenna shares two boys with her beloved husband, Bodhi. She gave birth to her and Bodhi’s first son Story Elias Elfman on July 23, 2007. At the time of birth, Story weighed in at 7lbs 2oz.

Similarly, Jenna and Bodhi became parents for the second time on March 2, 2010, welcoming their son Easton Quinn Monroe Elfman. As of now, the Elfman brothers are living the limelight life with their celebrity parents.

Like, Cooper Matheson, the 14 aged Story and Easton, 12, are gaining wide media attraction as celebrity sons. They are often seen on the posts updated by Jenna and Bodhi on their verified Instagram account.