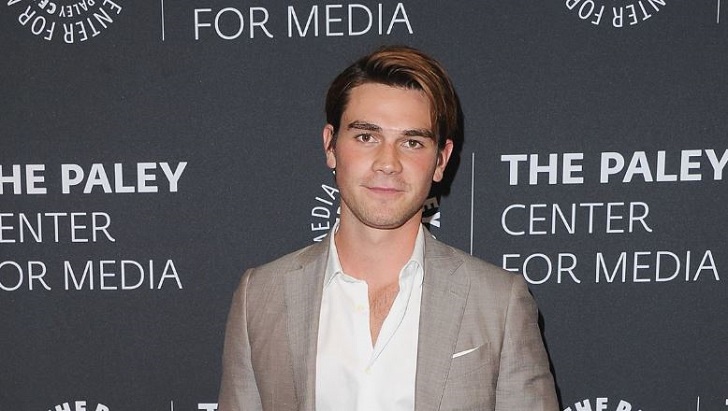 Since his debut in the cinematic world, dashing actor KJ Apa never misses a chance to amaze his fans through acting credits. He has a good fan following of more than 18 million followers on his official Instagram account. The New Zealand actor debuted in the prime time soap-opera Shortland Street. There he played the leading role of Kane Jenkins.

The nine-year-long acting career has helped KJ develop a successful professional life. But, what about the actor’s love life? How is his romantic relationship with girlfriend Clara Berry running? Do they share a child? Know the details regarding the pair’s romantic life in the following sections.

The 25-years-old actor KJ Apa not only runs a successful acting life but also bears the responsibility of a father. His son Sasha Vai Keneti Apa was born on September 23, 2021. The baby mamma is no other than Apa’s beloved partner Clara Berry.

On May 20, 2021, KJ and Clara publicly announced that they were expecting their first child through official Instagram handles. He shared the news by uploading a picture with Berry showcasing her baby bum without writing any caption. On the other side, Clara shares a photo flaunting her growing belly with the caption, “a baby boy and an egg with yolk frying in a pan emoji.“

Like pregnancy news, they revealed their newborn’s birth via social media. Sasha Vai Keneti Apa born on the 23rd of September. He is a perfect perfection. I am the luckiest to have now two men of my life, filling my heart with this cosmic gigantic vast love, writes Clara, uploading a snap of a newly born baby holding her finger.

As of now, I Still Believe actor KJ and his love partner Clara are merrily and jointly raising their only son. Sasha Van is only ten months old but has started gaining attention as a star kid. He sometimes appears on his parent’s social media posts.

Not in the entertainment, but beautiful Clara belongs to the fashion industry, actively pursuing a career as a fashion and lifestyle model. The French model Berry was born on December 7, 1993, and is four years older than her present partner Apa.

The 5-feet-6-inch (167cm) tall brown-eyed beauty Berry is also featured on the cover of LUI Magazine. Similarly, Clara is a social media personality with over 1 million Instagram followers, where she shares pictures indicating her professional and personal life. Moreover, she has sung for Insomni Club‘s song No-Us-Lova.

The details regarding actor Apa and model Berry’s first encounter are unknown. But, the social sites became a medium for them to accept their relationship publicly. Their romance rumour sparked in late 2019 when fans witnessed KJ liking Clara’s post she uploaded on her Instagram.

Similarly, while answering KJ’s common searches on the internet, to Wired, in December 2019, he said, “very much in love right now.” But did not clarify who his lover was. Finally, in February 2020, Clara made their relationship Instagram official, sharing an image of enjoying themselves in Bali, Indonesia, writing, “I’ll look for your heart if you’re importing elsewhere.”

In mid-2010, their break-up rumours circulated as they did not share any images. However, on the occasion of their first anniversary, on January 3, 2021, Berry shared the photo with KJ.

“This year with you baby was unreal. I love you unconditionally, without control and with all my heart. We made a lot of heaps.”

As of now, Berry and Apa are living blissfully. KJ and Clara have not taken their three years-long relationships to the next level. However, in sharing the video displaying Apa using their son’s bottled milk on his coffee, he employs the caption, “My wife is a milk machine and I love it.”

The 6-feet-0-inch (183 cm) tall KJ doubtlessly collects an enormous wealth from his professional acting works. Apa has an approximate net worth of $3 million. He has made appearances in movies such as A Dog’s Purpose, The Hate U Give, The Last Summer, I Still Believe, Dead Reckoning, and Songbird.

The 2017 psychological comedy-drama film A Dog’s Purpose earned $205 million in its box-office collection under the production budget of $22 million, where actor Apa played the role of Teenage Ethan Montgomery.

Apa’s acting career took a turn in 2017 after he got a chance to portray the leading character of Archibald “Archie” Andrews in The CW teen drama series Riverdale. KJ also won Saturn Awards for the series and received a People’s Choice Award and Teen Choice Award nomination. The American actress Riley Keough has also starred in Riverdale, which has 6.6/10 IMDb ratings.

Besides, KJ Apa is also a model who has represented several brands. He is the ambassador of the French clothing company Lacoste. From the appearance, Apa is earning an impressive income.