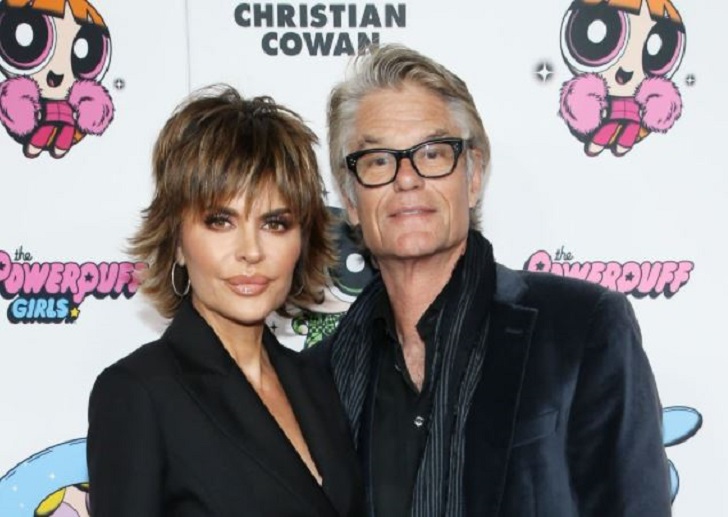 Lisa Rinna and Harry Hamlin are among the best couples in the Hollywood entertainment industry. Lisa is a successful actress, entrepreneur, fashion expert, and TV personality. She is widely famous for being the main cast of Bravo’s reality series The Real Housewives of Beverly Hills (RHOBH). Rinna runs a successful ‘Lisa Rinna Collection‘ and ‘Rinna Beauty,’ a cosmetic line.

On the other hand, Harry has been a prosperous actor working in the Hollywood Film Industry since 1976. Hamlin is renowned for his appearance as Perseus in the Clash of the Titans. Also, Harry is an author who published his autobiography book Full Frontal Nudity in October 2010.

Now, let’s know more about Lisa and her husband Harry’s marital life in the following sections. What is the secret behind the duo’s successful wedding life?

The Veronica Mars actor Harry ”enchanted right away” after his first meeting with Days of Our Lives actress Lisa.

Rina and Hamlin had their first encounter at a restaurant. He confessed it in an interview for The Jess Cagle Show. Harry said, “

“We met in a restaurant. She was working at an eyeglass store doing the night shift selling sunglasses. And I happened to know the owner of the store, I was having dinner with him and she came in to deliver the keys when she closed the store at 10.”

It was love at first sight for Harry. Soon, Lisa and Harry began talking, meeting each other. They became close, which later turned into a romantic bonding.

Lisa decided to take her beau Harry’s surname following several years of dating. The Hollywood personalities tied the wedding knot on March 29, 1997. They walked down the aisle in the backyard of their Beverly Hills home.

The bride and groom’s family members, friends, and relatives attended their wedding reception. Lisa looked adorable in her strappy V-neck gown that featured a long wedding veil. On the other hand, Harry dashes the look wearing all black, a tuxedo, shirt, and tie.

Since the wedding day, Mr. and Mrs. Hamlin have been sharing a healthy and strong marital relationship. Probably one of the admired Hollywood pair Lisa and Harry have managed to keep their married life influential. They have set an example of a perfect and long-lasting marriage.

The married duo is celebrating their 25th marriage anniversary this month. With the increase in the year of marriage, Lisa and Harry’s bond grows more robust. The secret behind their two-decades-long successful marriage is “being diametrically opposite,” Harry said with PEOPLE.

The 24-years-old Delilah is a model by profession. She has walked runways for New York Fashion Week for Tommy Hilfiger, Alice + Olivia, ‘Dolce and Gabbana,‘ etc. Also, Delilah has modeled for various fashion brands. Likewise, she has featured on the cover of VOGUE Japan.

On the other side, Lisa’s younger daughter Amelia, 20, is also a fashion model with 1.1 million followers in her official Instagram account. Amelia Gray has appeared in the international fashion magazine Numero TOKYO. She is managed by the modeling agency Women 360 Management New York.

Besides Delilah and Amelia, the 70 aged Poisoned By Love actor Harry has a son Dimitri Alexander Hamlin, born via his relationship with actress Ursula Andress. Additionally, Hamlin was previously married to actress Laura Johnson (1985-1989) and Nicollette Sheridan (1991-1992).