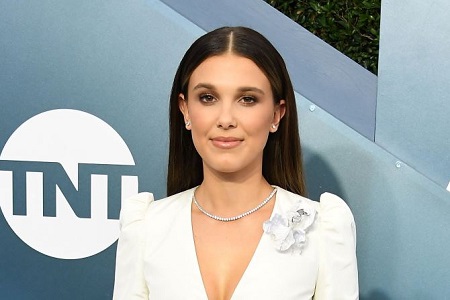 Millie Bobby Brown is an actress who is gathering popularity in the teenage. Brown is 18-years-old and has already lived the life of succession. The British actress and model Millie is also the youngest person appointed as the UNICEF Goodwill Ambassador.

The Screen Actors Guild Award-winning Millie is famous for her role as Eleven in the successful horror drama series Stranger Things. Her prominence rises to fame after playing a role in Godzilla: King of the Monsters. Because of her massive success in her professional life, people are interested to learn about her love life details. Now, let’s find out about her dating life in the following sections.

The Enola Holmes actress Millie is blissfully dating her boyfriend, Jake Bongiovi. Brown’s partner Bongiovi is a celebrity kid. With more than 300 thousand followers on Instagram, Jake is the son of singer Jon Bon Jovi and his wife, Dorothea Hurley.

After several weeks of dating rumors, Millie and Jake confirmed their relationship in June 2021. The duo publicly announced their relationship on Instagram in November 2021. As of now, Brown and Bongiovi share a close bond as perfect partners. The pair spends their quality time together and shares pictures on their social sites.

Moreover, Millie and Jake make their red carpet debut as a couple at the 2022 BAFTAs where they looked super cute and the image of young love.

The Once Upon A Time in Wonderland actress Millie Bobby has several failed relationships. In October 2017, Millie and Jacob Sartorius‘ dating rumors arose as they openly flirted on social media. Later, on 2018 Valentine’s Day, Brown and Sartorius confirmed their dating.

The 19-years-old Jacob is a social media star who has 10 million followers on his official Instagram account. Millie and Jacob shared a good bond; however, in July 2018, they ended their relationship. The couple announced their separation via Instagram post. Even after the split, they remain friends.

It is reported that during the relationship with Millie, Jacob asked another girl to send her nude pictures, which Millie noticed and that led them to part ways.

Millie is also famous for her romantic link with English footballer Romeo James Beckham. The 19 aged Romeo is also known as the son of football legend David Beckham and singer, and fashion designer Victoria Beckham.

However, they apparently split due to their time apart amid the numerous national lockdowns and clashing work schedules.