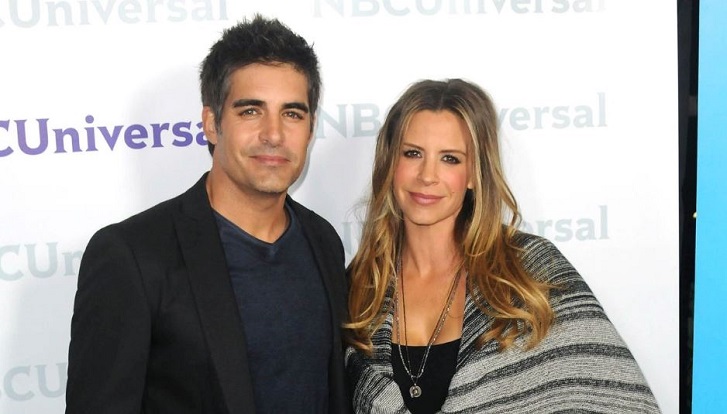 Galen Gering began grabbing attention and fame right after his debut television work. Gering started his acting career in 1999, landing his leading role as Luis Lopez Fitzgerald in the NBC soap opera Passions. He has been nominated for his appearances in the Daytime Emmy Awards (2002 and 2005) and ALMA Awards (2008).

The dashing Hollywood actor was born on February 13, 1971, in Los Angeles, California, to Alan Gering and Michele de Onate. Galen holds mixed ethnicity of Russian/Jewish (from his father’s side) and French and Spanish (from his mother’s). The actor has an elder sister named Chaissa Gering. Talking about Galen’s education, he studied creative writing and film at New York University.

The actor’s wife was born Jennifer Louise Hudlett on July 6, 1971, in Fort Lauderdale, Florida, to Fred Hudlett and Jeanne Hudlett. Jenna graduated from the University of Miami, where she studied theatre and journalism broadcasting. As a teenager, she started her professional career as a model and has worked for various brands and modeling agencies.

Later, in 1997 she got an opportunity to play the role of the model in the short film Incredible Bulk. Later, in 2000 Jenna provided her first role as Sasha Graves in the TV series Baywatch. Hudlett has starred as Kristen Moore in the ABC police procedural drama series NYPD Blue. Also, the actress is recognized for playing Sandra Marino in the television series Miami Sands.

Galen Gering And Jenna Gering Have Been Married Since 2000

The 6-feet-2-inch (188 cm) tall Galen and Jenna tied their nuptial knot on January 3, 2000, in Las Vegas, Nevada, at Graceland Wedding Chapel. The couple kept their wedding secret for six months. Jenna wore a black dress with a veil, and Galen wore black pants and sweatshirts on their big day.

How and where Gering and Hudlett met and began their romantic relationship is unfamiliar. But, the pair dated for several months before exchanging the wedding vows. As of now, the Venice: The Series actor Galen is sharing a blissful marital life with his beloved wife.

Mr. and Mrs. Gering have been married for 22 years, and the marital bond is still strong. Wishing spouse Jenna on Valentine’s day, Galen shared a video from their wedding, writing, “Vegas Baby Vegas. Remember that time we went to Vegas and got married and didn’t tell anyone for six months, and we (mostly me) were freaking out about it, and it turned out to be the best thing that ever happened to me. Yea-that was pretty great. I love you, @jennagering; you are the best, and I’m so lucky to call you my valentine.#happyvalentinesday.”

The Days Of Our Lives actor Galen and his wife Jenna welcomed two boys from their marital union. Galen and Jenna became parents for the first time on August 3, 2006, sharing their first son, Dillon Phoenix Gering. He was born weighing 8lbs and 4 oz in Los Angeles.

Similarly, the husband-wife duo welcomed their second son Jensen Gering on July 17, 2008. Jensen, 14, is a musician and actor playing the role of Elliott Lucas and working in the music department of the upcoming movie Wickensburg. Eloise Joni Richards‘s mother, Denise Richards also featured in the film. The 5-feet-7-inch (170 cm) tall Jensen has also performed in several concerts and musical programs.