Skip to content
Home » Entertainment » Siblings Sawyer and Sullivan Sweeten, Where are they Now?

Siblings Sawyer and Sullivan Sweeten, Where are they Now? 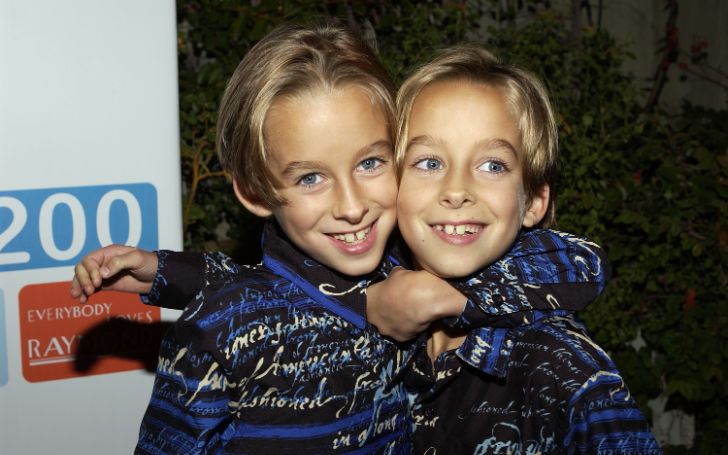 Sawyer Sweeten and Sullivan Sweeten were American child actors. They are popular for playing Geoffrey Barone, and Michael Barone in the American Sitcom Everybody loves Raymond.

The Twins were born on May 12, 1995, in Brownwood, Texas, to their parents, Timothy Sweeten and Elizabeth Millsap. The twins have an older sister Madylin Sweeten.

Where is the Sweeten Twin now?

The series started in 1996, and they played the roles until the final episode in 2005.

After the series wrapped in 2005, The Twin brothers left Hollywood for good and never returned to the Spotlight.

Their sister Madylin Sweeten is still in the industry and has done many movies, including Toy Story 2 (voice-over), Lucifer, Eagle Eyes, Grey’s Anatomy etc.

The Death of Sawyer Sweeten. What was the cause of his death?

Sawyer sweetens sadly passed away in 2015 while visiting his family in his Texas hometown. The former child actor took his own life two weeks shy of his 20th birthday.

The family said at that time, “We are traumatized. Our beloved son, brother, and friend Sawyer Sweeten took his own life. He was a week away from his 20th birthday. At the sensitive time, our family request privacy and we beg of you to reach out to the ones you love.”

Sawyer died ten years after the series ended. Tributes flowed for the young star, with his sister Madylin leading the tributes on social media.

“At this time I would like to encourage everyone to reach out to the ones you love.”

“Let them have no doubt of what they mean to you.”

“Sawyer Sweeten was a funny and exceptionally bright young man. he is away from us far too soon.” Patricia Heaton, Who played his mother in the series, posted on Twitter.

Brad Garrett, who portrayed Sweeten’s on-screen Uncle Robert, released the statement: “The Sweeten family was our family for those nine years on Raymond. My deepest condolences and love go out to them during these unimaginable times. “

Where is the other Twin brother Sullivan Sweeten now?

While the twin’s big sister Madylin, now 30, went on to star in TV movies such as The Christmas Path and A Dog of Flanders. She is still working in the industry today. Whereas the brothers pretty much retreated from the Spotlight.

Even in the lead-up to his brother’s death, Sullivan, now 27, had shied away from acting, only returning in 2017 for the short film Casting.

The career of The Sawyer and Sullivan Sweeten

As we already know, The twins started their acting career for one year in the television series Everybody Loves Raymond (1995-2005) with his older sister Madylin Sweeten.

Sweeten Twins performed for the nine episodes of the series. Later in 2002, he presented in Frank McClusky, C.I. She has not appeared in the entertainment industry.

The late Sawyer Sweeten has also worked in one episode of Even Steven in 2000. And has worked in one film Frank McKlusky, C.I., in the role of Young Frank McClusky.

Everybody Loves Raymond is an American sitcom television series created by Philip Rosenthal. The series aired on CBS from September 13, 1996, to May 16, 2005, with 210 episodes. The series has nine seasons.

The show is based on the life of an Italian-American everyman Raymond Barone. He is a sportswriter for Newsday living with his family on Long Island.

The Personal Life and Net Worth of the Sweeten Twins

The 27 years old American actor Sullivan has earned a great amount of money from his professional career. It calculates that his estimated net worth is $1 million. The primary source of income is from being an actor. However, he has not revealed the specific salary and earnings in the Spotlight.

Despite this, he and his brother Sawyer together brought a house in California in Riverside. On the other hand, his sister Madylin has a net worth of about $5 million.

Also, read about, How Much is Cory Tran’s Net Worth?

Hence, he has not disclosed his personal life to the media, so he is young and focusing on his professional career.

Therefore, there are no reports regarding his past affairs and current relationship. Sullivan seems secret about his personal life and has hidden his relationship from the media. He seems single and sharp in his career and doesn’t want to waste time on any relationship.

For more celebrity content, please do visit our page, Favebites. If you have any queries about this article, please do leave them in the comment below.