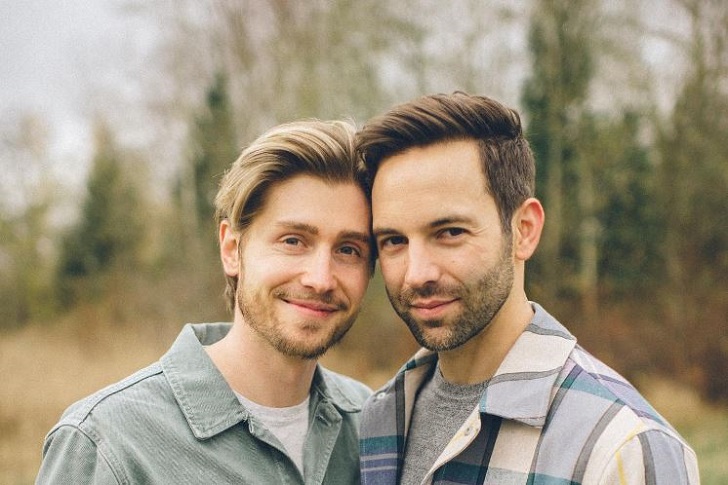 Brad Harder is among the LGBTQ celebrities who openly flaunts his sexual orientation without hesitation. His openness towards his sexuality has admired and fascinated many people of the same community to come forward and raise their voices. Brad is an openly gay guy pursuing his professional career in the acting sector.

The Canadian actor is better known for his gay portrayal of Jake in the Hallmark Channel’s The Christmas House. And its sequel, The Christmas House 2: Deck Those Halls. The actor was born Brad Lee Harder in Alberta, Canada, on March 7, 1985. Harder has sisters named Jessie Harder and Alana Harder.

Brad is currently in a marital relationship with his longtime partner. He held a same-sex marriage and is now living blissfully with him. Check out Brad and his husband’s relationship details in the following sections.

The Aurora Teagarden Mysterious actor Brad is in a romantic relationship with his beloved Graham Arychuk. The professional details of Harder’s partner Graham are unknown. But his official Instagram account indicates he is an adventurer and animal lover.

How and when Harder and Arychuk met and shared a romantic bonding is unfamiliar. But, their social media uploads suggest that they have been together since 2013. On April 13, 2013, Graham shared an image with Brad, writing, “It’s official. Finally!“

Likewise, on December 20, 2013, actor Brad shared a snap with his partner Graham wishing him his Birthday, “Happy Birthday to my amazing guy! Love you!” Later after two years, in 2015, Harder posted a picture mentioning Graham, his “babe.”

Got Married After A Year-Long Engagement

The gay couple dated more than four years before sharing their engagement ring. Brad and Graham proposed to one other by kneeling in August 2017 during their trip to Burg Eltz (Eltz Castle), Germany.

The pair chooses to share the engagement news via their social sites. Brad shared beautiful images from the engagement, captioning, “He said yes! Then he proposed!! Found my Prince who is incredible in every way! Excited to get married next year! Moving into the castle hasn’t been scheduled yet.“

On the other side, declaring the news, Graham wrote, “I said yes! And then he said yes! I could not be more lucky to be living my life next to someone so amazing. Love you forever.“

The Gay actor Max Parker is also engaged to his partner Kris Mochrie.

Following a nine-month long engagement, The Magicians cast Brad and his longtime partner Graham exchanged their wedding vowed on June 16, 2018. Their wedding ceremony was held in North Vancouver, British Columbia, in the presence of their friends and family.

Like the engagement news, Brad, who dashed his wedding look wearing black suit pants with a white shirt and a white bow tie, announced their wedding through Instagram. “I married my soulmate! It was the most magical day that words can’t even describe with all my favorite people! Mr & Mr. Brad & Graham Arychuk!! #husbands #gaymarriage,” the actor writes in the caption.

As of now, the actor and his husband Graham are sharing a blissful marital bond. The married pair have already celebrated their fourth marriage anniversary. The adventurous couple travels to different places.

Harder explained through Instagram, “This afternoon at 3:19 our son Kael Cedric Arychuk was born. This journey that we’ve been on together is nothing short of magical. Deveney is the most incredible human we know, for giving us the chance to be parents. I’M A PAPA!!!!“

Again on September 2, 2020, they shared the news of them welcoming their second baby. Graham revealed, “Well friends, shit is about to get real. BABY NUMBER 2 is on the way. We are so excited, and so honored that our amazing friend Jenn is caring for and nurturing our beautiful baby.” Their daughter
Tegan Bradlee Arychuk was born in August 2021.

The parents are jointly and happily raising their toddlers. The Arychuk siblings often make their presence on Graham and Brad’s Instagram feeds.