Who is Babak Tafti Girlfriend? Know about Dating Status 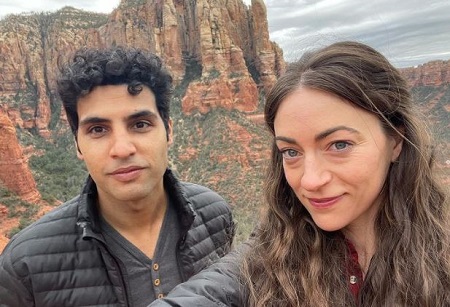 The Irish/American actor Babak Tafti is famous for appearing in HBO’s satirical comedy-drama series, Succession. The actor Tafti with an MFA degree from Yale School of Drama, has featured in the successful series Legacies and Super Pumped.

Similarly, Babak has played his role in theatrical shows such as Guards At The Taj, The Profane, etc. As of now, Tafti is struggling hard to pursue a better career in the acting field. Now, let’s learn about Baba’s personal life. Does he celebrate his 2022’s Valentine Day with his partner or stay single?

Babak, who celebrates his birthday on April 16 every year, is not a single man. He is committed to a robust romantic relationship with Eden Malyn. Tafti’s partner Malyn is also an actress. She has featured in Maybe Someday, Deadheads, and other movies and TV shows.

Malyn has helped Tafti as a coach for his audition in Succession (2018) and several other projects. The duo began their romantic relationship in April 2017. Since that day, Babak and his girlfriend Eden, 34, have shared a healthy relationship as the perfect couple. Also read: Cynthia Addai-Robinson

Following two-year-long dating, on December 26, 2020, Babak got down to one knee and proposed to his partner Eden with a rhombus-shaped diamond ring. She also merrily accepted his proposal. The pair announced the engagement via an Instagram post.

Babak and Eden travel, visit many exotic places, and spend quality time with each other. The duo also attends public events together. Likewise, they never miss a chance to share romantic pictures on their social sites. On February 14, 2022, Babak shared a photo of Eden, captioning, “My Forever Valentine #fiance.”

Planning To Get Married In April 2022

After a year-long engagement, Babak and his fiance Eden eagerly wait to take their relationship to the next level.

On October 16, 2021, the couple announced their wedding plans via Instagram. Babak wrote, “Six months till,” with a bride and groom’s emoji. Similarly, actress Eden captioned the image saying, “SIX MONTHS until I get to marry this dreamboat.”