Skip to content
Home » Entertainment » Who Is Jazz Charton? Know The Details Regarding Kieran Culkin’s Wife 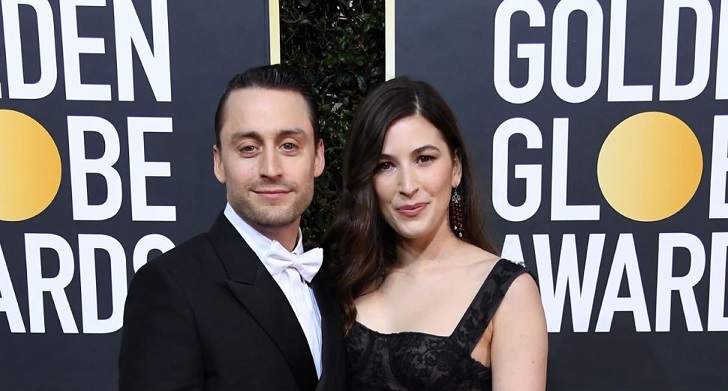 Not only a celebrity but their family members also gather media attention. Due to celebrity recognition, they also got a chance to make their appearance at high-profile events. Jazz Charton is also obtaining stardom by being a celebrity wife. She is the wife of Kieran Culkin, an American entertainer.

Jazz was born on May 20, 1988, in the United Kingdom to her mother, Corrine Charton. Her mother, Corrine, is a former fashion model. Later, she showed her interest in art and received a Bachelor’s Degree in Arts (B.A) from Central Saint Martins, London and a Master’s in Fine Arts from Middlesex University. Besides, other details regarding Jazz’s early life are missing. Her professional work information is also under the radar.

Charton is living a limelight celebrity life with her husband, Kieran. How and when did Culkin and Charton start their romantic journey? Know about it in the subsequent sections.

Kieran Culkin, In An Acting Sector Since 1990

The 5-feet-7-inch (170 cm) tall Kieran is a Hollywood experienced actor who has spent more than three decades in the entertainment world. Kieran is one of the sons of stage actor Kit Culkin and his former partner Patricia Brentrup. Kieran’s brothers, Macaulay Culkin (b. 1980) and Rory Culkin (b. 1989), are also actors.

Kieran started his Hollywood journey in 1990 by playing Fuller McCallister in Home Alone, where his elder brother Macaulay played the leading role of Kevin/Fuller’s cousin. The 39 aged Kieran received his first Young Artist Award nomination for Father of the Bride (1991), where he portrayed Matty Banks.

His other movies and TV shows include Robot Chicken, Scott Pilgrim vs. the World, Movie 43, The Cider House Rules, The Mighty, Go Fish, Home Alone 2, etc.

The 34 old Jazz and Music of the Heart actor Kieran first met in New York at a bar in 2012. During an interview with the Hollywood Reporter, actor Culkin remembered their first meeting, “[she] was working in the music department of an ad agency.” “I said, ‘I’m Kieran. You have an English accent. What’s your name?’ She said, “Jazz.” I said, ‘J-A-Z-Z, like the music?’ And she said, ‘Yeah.’

However, at the time, Charton was sitting with another man. Kieran, who felt Jazz, “a most beautiful girl,” asked her “if he was her boyfriend” after the man left the place and went to the bathroom. In reply, Jazz said, “no.” Then, Culkin questioned if he “could be her boyfriend?” Charton also agreed to continue a romantic relationship with him. They have “been together ever since.”

The couple did not wait long after starting a romantic relationship to exchange the wedding vows. Jazz and Infinity Baby actor Kieran married on June 22, 2013, in a private ceremony in Decorah, Iowa. So, nothing much is known about it. Jazz shared their wedding picture on her official Instagram account after two years on June 22, 2015.

Later, on June 22, 2017, she explained their marriage, writing, “#tbt to taking time out of our road trip to get married by the side of the road in Iowa during a storm 4 years ago today. Still the best pit stop I’ve ever made.”

Mrs. and Mrs. Culkin have been married for nine years as of 2022. They are sharing a blissful marital bond as perfect married pairs. The actor does not have any official social networking sites. But Jazz never misses updating their fans by uploading pictures on Instagram, where she has amassed more than 15 thousand followers.

On May 14, 2019, Mrs. Culkin surprised her Instagram followers by sharing an ultrasound picture of a baby. She chooses to write, “My favorite surprise so far. We had no idea how much we wanted this until it happened. We’re excited/terrified/ecstatic/unprepared but we cannot wait to meet our little unexpected creation in September, in the caption.

Jazz gave birth to their daughter Kinsey Sioux “Zissou” Culkin on September 13, 2019. She also announces Kinsey’s birth through an Instagram post. Again in 2020, sharing a baby bump picture, she declared her second pregnancy.

Kieran and Jazz became parents for the second time on August 17, 2021, welcoming a baby boy Wilder Wolf Culkin. Like Jazz, Kinsey and Wilder are also gaining fame as celebrity kids. However, Jazz and Kieran prefer to keep their toddlers far away from the limelight. The parents have yet not revealed their full faces. Jazz shares pictures with her daughter and son by putting some emojis on their fronts.

As noted above, the details concerning Jazz’s profession are mysterious. It seems like the celebrity wife is not involved in any professional work at the moment. She helps her husband and might be busy raising their children.

The dashing actor Kieran who has been working since childhood has a net worth of $5 million. The actor has worked in various films, which have earned a good income at the box office. Culkin’s first movie, Home Alone, made $476.7 million under the budget of $18 million in 1990. Similarly, Home Alone 2 gathered $359 million with $28 million.