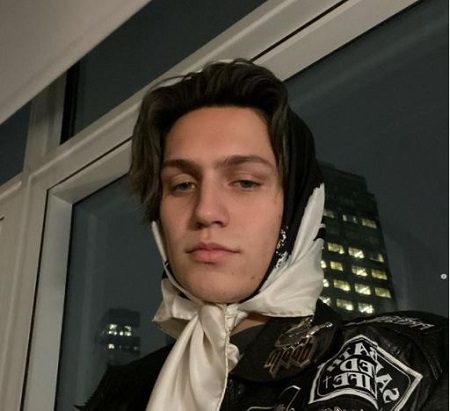 Cole Chase Hudson, widely popular as Lil Huddy, is an internet personality. Huddy rises to fame after amassing millions of followers in his official Tiktok account. At the moment, he has 32.4 million followers. Similarly, Lil Huddy is also a singer who released his first studio album Teenage Heartbreak in 2021.

The Youtuber Lil Huddy has more than 2 million subscribers on his Youtube channel. Similarly, he has 12 million followers on his Instagram account as of February 18, 2022. Also, the internet star Lil Huddy also merch hoodies, T-shirts, and other apparel. Who is Huddy’s girlfriend? Know about the young social media personality’s love life in the following sections.

The 19-years-old internet sensation Lil Huddy is private regarding his personal life. Unlike other social media stars, Huddy is tight-lipped regarding his love life.

After the former unsuccessful relationships, Lil Huddy chooses to keep his relationship status far away from the limelight. It seems like the Instagram star currently lives a single life without having any romantic affair.

The boy has also not shared any romantic pictures on his Instagram account. Currently, the 21st Century Vampire singer might be focused on his professional works.

The Don’t Freak Out singer Lil Huddy is also famous for dating Tiktok Queen Charlie D’Amelio. The 17 aged Charlie with 136.2 million followers on Titok is also the one to keep Guinness World Record. Also, she has featured in the music videos ‘Baby, I’m Jealous‘ by Bebe Rexha and Doja Cat.

The Tiktok stars D’Amelio and Huddy began their romantic relationship in December 2019, but they publicly announced the relationship in February 2020. They confirmed their dating news via an Instagram post; however, the photo is unavailable now.

Everything was going fine, but in March 2020, the rumors regarding Charlie and Lil’s separation swirl all over the media. Later, they confirmed their break-up via an Instagram story in April 2020.

In May 2021, Charlie and Lil Huddy made their red carpet appearance attending the 2021 iHeartRadio Music Awards function. Their public appearance makes their fans feel like the duo has reunited. However, they have not confirmed whether they rekindled.

Cynthia and Huddy dated three months before breaking up in July 2019. He confirmed the news of their separation via tweeting, “me n Cynthia are no longer together. I love the gal to death but things just haven’t been working out. I hope y’all understand.”