Skip to content
Home » Entertainment » Who is Odette Annable married to? Married Life with Dave Annable & Past Affairs

Who is Odette Annable married to? Married Life with Dave Annable & Past Affairs 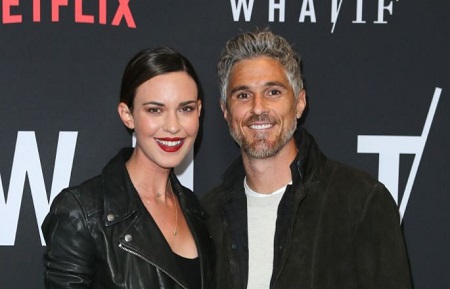 The Hollywood actress Odette Annable’s prominence rises to fame after playing Dr. Jessica Adams’ role in House, a medical drama series. Annable’s child role in Kindergarten Cope is also famous. She played a Spanish-speaking student in the film at the age of 5.

Some said, ”Matches are made in Heaven.” Odette and her husband, Dave Annable, are also the perfect matches in the Hollywood industry. The 43 aged Dave is also an actor by profession. He has appeared in movies and TV shows such as Brothers & Sisters, 666 Park Avenue, Heartbeat, Final Visions, etc.

After an unsuccessful relationship, Odette found her life partner Dave while working her professional job. Odette, 36, and Dave first met in the final season of the ABC drama series Brother & Sisters. In the series, she has played the role of Annie, and Dave portrayed the character of Justin Walker.

After meeting for the first time in the set of the series, Odette and Dave shared a good bond and soon began their romantic affair. Later, in October 2010, the couple decided to take their relationship to the next level by exchanging wedding vows.

Odette and Dave’s intimate wedding ceremony was held in Ojai, California, in front of their 215 guests. On the big day, the bride Odette wore a floor-length strapless gown by Monique Lhuillier. As per People, she finished her wedding look wearing 10-carat diamond earrings.

On the other side, the groom, Dave, dashes the wedding look wearing a navy blue tuxedo. From the wedding day, Mr. and Mrs. Annable share a good bond as perfect married partners. However, in October 2019, Odette and Dave revealed they ended their nine-year-long marriage.

Later, in August 2020, the married duo gave a chance to their relationship. Instead of divorcing, the husband-wife pair reconciled their marriage. Revealing the news of their back together, Odette wrote on her Instagram, “2020. It ain’t all bad news. #TheAnnbles.”

Since then, they have been living a blissful marital life. Odette and her husband Dave have already celebrated their 11th wedding anniversary.

Mother Of An Adorable Baby Girl

From the solid marital bond, Odette and Dave shared a girl. On May 11, 2015, she announced her pregnancy via Instagram post. Later, on September 7, 2015, she gave birth to their daughter Charlie Mae Annable. They reveal their child’s birth through Instagram.

Announcing the birth of baby Annable, Odette wrote, “Dave and I are thrilled to introduce you to the newest member of the Annable family, Charlie Mae Annable. Born September 7th. I took Labor Day quite literally this year.”

As of now, Dave and Odette are jointly parenting an only daughter. The six-year-old Charlie Mae also gains media attraction as a celebrity daughter. She is seen on most of the posts updated by her parents on their social sites.

Before sharing an intimate relationship with Dave, The Astronaut Wives Club actress, Odette was linked to Trevor Wright. Trevor is also an actor who has appeared in NYPD Blue, CSI: NY, and others.

The 5-feet-8-inch tall actress Odette and Trevor began their romantic affair in 2005. Following two years long dating, Wright proposed to Odette with an engagement ring in 2007. She also accepted his proposal. However, they called off their engagement in 2008, after a year.