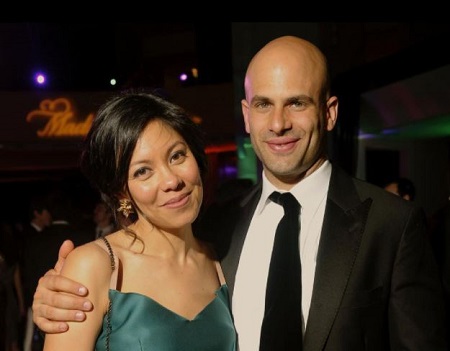 The 42-years-old NBC’s food analyst Sam is in a robust marital relationship with his wife, Alex Wagner. Like Kass, Wagner also lives a successful professional life. The 44 aged Alex is a journalist and author. Wagner co-hosts the documentary series The Circus on Showtime.

Sam and Alex first met at the White House Correspondent Dinner party. The British journalist Richard Wolffe, the MSNBC commentator, introduced Sam to Alex. Soon, after knowing each other, they shared a good bond. Later, the duo began their romantic relationship and got engaged.

Since the wedding day, Mr. and Mrs. Kass are sharing a healthy bond as a perfect married couple. The husband-wife duo is soon celebrating their eighth wedding anniversary. Additionally, the married duo also shared pictures on their social sites.

Alex and her husband, Sam, are parenting their two adorable boys. In July 2017, she gave birth to their first son Cy Kass. Similarly, on April 16, 2019, they became parents for the second time, sharing Rafael Thiha Kass.

Announcing the birth of their second boy, Sam said, ”I’ve been keeping a secret for a little while now, wasn’t ready to share. Meet Rafa. Rafael Thiha Kass. (Thiha means Lion in Burmese).”

As of now, Alex and Sam are jointly parenting their kids. The 4-years-old Cy and Rafael, 2, are also gaining fame as celebrity sons. They feature on most of the posts updated by parents on their social sites.