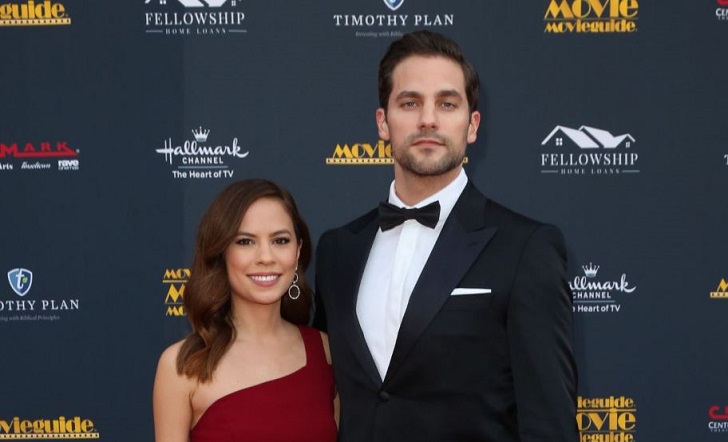 Actress/Actors accumulating fame and fans is not a new thing nowadays. They received success and the spotlight after working in the movies and TV shows. The American actress Kimberly Daugherty is also acquiring a reputation being an actress. Daughtery is famous worldwide for making her appearance as Wendy in the ABC medical drama Grey’s Anatomy.

The actress was born in Walnut Creek, California, as Kimberly Ruth Hidalgo on February 5, 1989, to the mother, Kathy Hidalgo and father, Loreto Hidalgo. She has a sister named Erika Fermina, who is also an actress and has acted in Pathfinder: Knights of Everflame, The Dungeon Run, etc. Also, Kimberly’s big brother’s name is Kris Hidalgo. Kimberly is a graduate of the University of Southern California (USC). From there, she received a B.A. degree in Communication.

Kimberly is obtaining abundance stardom for being a celebrity wife. She is the spouse of fellow actor Brant Daugherty. Get the details of Mr. and Mrs. Daugherty’s marital life in the following sections.

The social sites became a medium for Smoky Knights actress Kimberly to meet her now husband, Brant. Hidalgo and Daugherty first met through a dating app in 2016.

After knowing each other, Kimberly and Brant did not delay in taking their relationship ahead. They soon began a loving romantic relationship, and she has been sharing snaps with Brant on her official social networking handles since October 2016.

“So we have some exciting news to share with everyone. A few weeks ago @kimhidalgo and I visited Amsterdam and I asked her to marry me! More importantly, she said yes. Now she’s stuck with me forever. Sucker,” he wrote on his February 26, 2018, Instagram post, sharing engagement news to the public.

The Mason, Ohio, native was born Brant David Daugherty on August 20, 1985. The Columbia College Chicago alumnus Brant is a popular actor in the Hollywood Film Industry. Daugherty is famous for his recurring role as Brian in the NBC soap opera Days of Our Lives.

The American actor Matt Cedeno is also a part of Days of Our Lives.

The 6-feet-1-inch (185 cm) tall Brant’s other recurring roles include in TV series such as Pretty Little Liars, Army Wives, Dear White People, and Freakish. Likewise, he has starred in Hallmark movies and TV shows such as Mingle All the Way (2018), Timeless Love (2019), The Baker’s Son (2021), and A Royal Runaway Romance (2022).

Moreover, Kimberly and Brant have appeared jointly in the television film A Christmas Movie Christmas (2019) as Lacey and Paul. Furthermore, they have worked in the movie The Nature of Romance (2021) as Jackie Sinclair and Sean Davis, respectively.

After a year of extended engagement, Kimberly celebrated a bachelorette party with her sister Erika, friends Sarah Hyland, and others. She shared beautiful images from her bridal shower bash on her Instagram page.

Adriana Klas handled the wedding photography. Furthermore, their wedding stories are featured in People Magazine. Kimberly shares their wedding news, writing, “6.15.19 My favorite day with my favorite man and all my favorite people.“

Mr. and Mrs. Daugherty are living a healthy marriage life without implicating in any buzzes related to the split. Kimberly and her hubby Brant are already on their third wedding anniversary, and the marital bond is still growing powerful. Moreover, they jointly make their presence in public programs and events and travel to their dream places without hesitation, sharing attractive pictures on their social sites.

The happily married couple Kim and Brant shared the news of them expecting their first kid in an interview with People in December 2020. She said, “We’re at that point in our lives where we are ready and excited to be parents. It’s something we both knew we wanted. It’s so special to start a family of our own.” The husband-wife-duo later shared the picture of baby ultrasonography using a “red heart” as a caption.

They are parenting their one-year-old son and enjoying their parenthood. Besides him, the married pair also raises their three adorable pet dogs. Kim and Brant shares pictures with them on their official verified Instagram accounts.