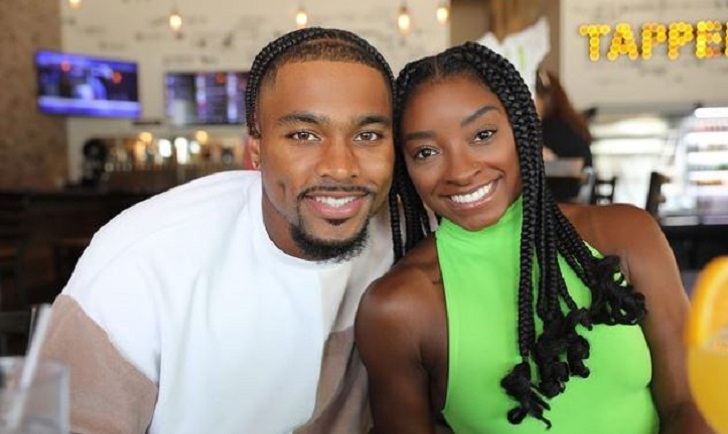 If you watch Olympic games, especially gymnastics, then the greatest artistic gymnast, Simone Biles, might not be a new name for you. Biles won four Gold medals in the 2016 Summer Olympics held in Rio de Janerio, representing America.

The 24-years-old Simone is in a blissful romantic relationship with an athlete Jonathan Ownes. Jonathan, 26, is an American football player who plays for NFL’s Houston Texas as a safety man. Ownes previously played for Arizona Cardinals.

Simone and Owens first met via social media in March 2020, when the first lockdown started due to the COVID-19 pandemic. Due to the global pandemic, their respective career schedules were postponed, which they used to create a good bond.

Know the relationship status of another football player Aaron Donald.

In an interview with Texas Monthly, Jonathan said, “I didn’t know who she was. I just hadn’t heard of her, and when I told her that, that’s one of the things she liked.” Simone and Jonathan began talking and sharing things that helped them “to know each other and created a bond and made it stronger.”

Later, in August 2020, Simone publicly announced her relationship with Jonathan via the Instagram official. On August 3, 2020, sharing pictures with Ownes, she wrote, “it’s just us.”

Following a one-year-long relationship, the footballer Jonathan finally proposed to his girlfriend. He got down one knee on February 15, 2022, and popped the question. Undoubtedly, Simone also happily accepted the proposal.

Announcing the engagement, Biles wrote n her Instagram, “THE EASIEST YES. I can’t wait to spend forever & ever with you. You’re everything I dreamed of and more! let’s get married, FIANCE.” Replying to the post in the comment section Ownes writes, “Ready for forever with you.“

Jonathan proposed Simone with an oval-shaped diamond ring. As of now, Biles and Owens are busy with the preparations for their wedding. On March 6, 2022, she shared a photo of herself saying, “said yes to the dress(es).”