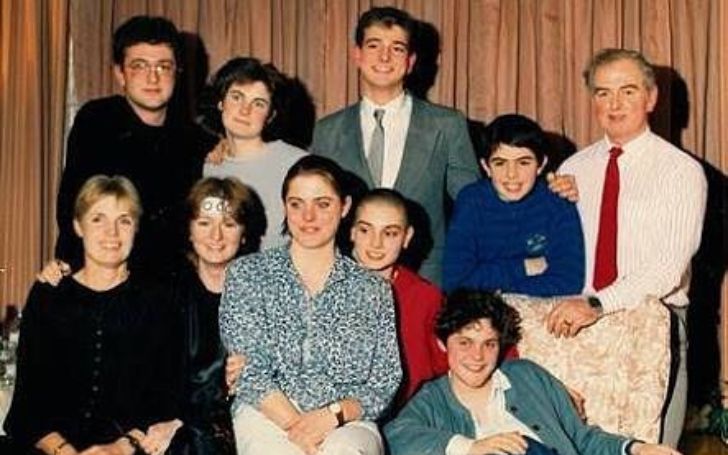 Sinead O Connor is an Irish-born singer and songwriter. She is widely famous, and she gained popularity and fame in the late 1980s with her favorite and fantastic debut album, The Lion and the Cobra.

She was born on 8 December 1966. In 2017, O’Connor changed her name to Magda Davitt. Since then, while maintaining her singing career, she has occasionally encountered many controversies.

Her second album – the 1990’s I Do Not Want What I Haven’t Got, gained considerable attention and mostly positive reviews. This album was also rated the second-best album by the NME team.

Audiences praised her for her voice and her original songs. She is also famous for her appearance: her trademark shaved head, often angry expression, and sometimes shapeless or unusual clothing.

Also read: Is Stephanie Lee in a relationship? Know Her Love Life

Sinead O’Connor has a long history of marriages. She’s been married four times in her life. She gave birth to four children during her four weddings. In 1987, she married John Reynolds for the first time.

They had a fantastic time with their marriage life for a while. Jake Reynolds, a boy, and Rosin, a daughter, were born to this marriage. They had a happy family life until they divorced owing to misunderstandings.

In 2001, she married Nick Sommerlad. This romance, however, did not survive long. They had a lot of problems. After four years of living together, the couple divorced in 2004 with a mutual decision.

In addition, she married Steve Cooney for the third time in 2010 and divorced after a year. In 2011, she married Barry Herridge, although the marriage only lasted one week. But this couple didn’t give birth.

She was hospitalized on her own will in January 2022, a week after her 17-year-old son Shane committed suicide, following a series of tweets in which she suggested she was about to save herself.

Sinead O’Connor, special bond with son Shane who has died at 17

Sinéad O’Connor‘s life was upside down when her 17-year-old son Shane was found dead in County Wicklow on Friday night after escaping suicide watch in an Irish hospital the day before.

Shane, Sinead’s second child, was born in 2004 and was the youngest of Sinead’s four children. The tweet was so emotional when She said,

“My lovely son, Nevi’im Nesta Ali Shane O’Connor, the very light of my life, decided to stop his human struggle today and is now with God. May he rest in peace, and may no one follow him.” My little one. I adore you to death. Please rest peacefully.”

Shane and O’Connor have had a strong friendship, with many people noticing their immediate connection in appearance.

Following the devastating news of Shane’s death, Sinead, Shane’s mother, dedicated a Bob Marley song to her son on her Twitter page.

“This is a gift for Shaney. My life’s ray of hope, My soul’s light source, My infant with blue eyes. You will always be my source of illumination. We’ll always be in each other’s company. No barrier can keep us apart The star was heartbroken.”

One thought on “Sinead O’Connor Husband “Steve Cooney” and Family”