Who is Abbie Brunett? Recent News about her husband, John David Duggar 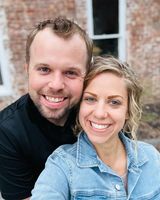 Abbie Brunett is a reality TV star of TLC. Moreover, she grabbed the attention being the love of John David Duggar. John’s family has been known for two decades on the TLC show called ”Counting On”. Abbie is the only female in the Duggar family who is a registered nurse and breaks all the stereotypes.

Like other Duggar families, they didn’t go on traditional courtships with chaperones. Rather, they set rules regarding their relationship, like they will not kiss until marriage. Both Abbie and John were mature enough before their marriage.

Abbie and John comes from a strict religious family

John’s family is a conservative Christianity follower stressing the importance of patriarchy.

John is among the nineteen children of his parents, Jim Bob and Michelle Duggar. His family views on women are different. Most Duggar women are encouraged to become homemakers and view their husbands as the ultimate authority of the house.

Accordingly, Abbie has also broken one of Duggar’s rules by wearing pants. In comparison, other Duggar women ought to wear skirts and knee-length dresses for self-consciousness.

Similarly, Abbie gave birth to her child in hospital, whereas others practiced the traditional method of home delivering and having mid-wives to help them give birth.

How did Abbie and John David Duggar marry?

While Abbie was 26 years old when John proposed to her and John was 29 years old. Because of John’s love for flight, he proposed to Abbie inside an airplane hanger on one knee. There was also a big heart made of roses between the hangers, and TLC featured their proposal in the season 9 premiere.

They quickly got engaged after six months of courtship which is way faster than other siblings. The couple got married in November 2018 at a baptist church. They have a grand wedding with over 1000 guests invited to attend their wedding.

They are the parents of a beautiful Gracie

Abbie and John married in their late twenties. But, John’s other family members married and became parents at their age.

So, saying they want a small family for themselves won’t be amusing. Still, Duggar’s women are not allowed to use any form of birth control pills and contraceptives; how many children do they want to have in the future is a question.

Abbie and John were smitten and excited to become the new parents. Their child was born in January 2020. They have named her Grace Annette and given her a sweet nickname of Gracie. The couple pierced their child’s ear when she was just seven months old.

They got a mixed response from their fans on their IG account, although that didn’t seem to bother them. They recently celebrated their baby’s second birthday, whose photos are yet to be shared. On her last birthday, they had a pink-themed party.

The couple survived a plane crash

Earlier in October this year, John crashed a plane in Waverly, Tennessee.

It was a single-engine airplane. However, John and his family have other feet of planes; John has flown the aero planed, totaling eight times altogether. But for months, this family kept it under wraps until YouTuber Katie Joy wrote it on her IG.

He got his pilot license in 2012. John was flying with his wife and daughter and nineteen other passengers. Fortunately, John landed it safely on the ground, and no serious injuries were reported among all traveling.

John has pointed it out to the engine failure, but still, the investigation is going on. People speculate if John is a well-trained and experienced pilot. Due to this traumatic survival, YouTuber Katie Joy has stated that Abbie is not willing to travel with John in the same flight in the future as she is shaken by what has happened.