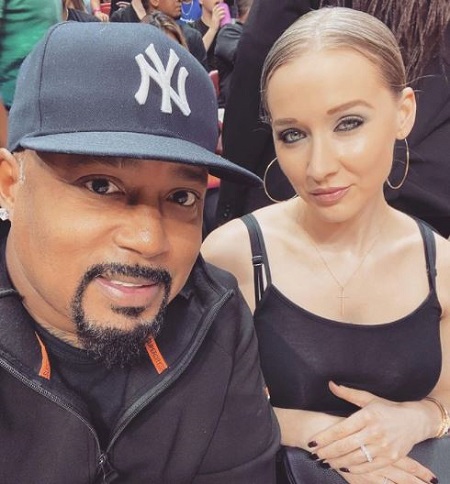 Heather Taras has lived in the limelight since sharing her intimate life with billionaire Daymond John. Well, John is a successful American entrepreneur who currently runs and is the CEO of FuBu, an apparel company.

Daymond is also known for appearing in Shark Tank, an Emmy Award-winning business reality show. He undoubtedly earns an impressive sum of wealth from his successful career as a businessperson.

Like profession, is John and his wife Heather’s relationship going strong and smooth? Know about their marital life in the following sections.

The Shark Group founder Daymond and Heather began their romantic affair after meeting for the first time through mutual friends.

Following two years of engagement, Heather and Daymond took their relationship to the next level. On June 2, 2018, the couple tied the wedding knot in front of their “family and friends.” The intimate wedding ceremony was held in Santorini, Greece.

The bride Heather walked down the aisle wearing a strapless, embellished mermaid gown from Nektaria. On the other hand, the groom, Daymond, dashes the wedding look by wearing a black tuxedo.

Since the wedding day, Mr. and Mrs. John have shared a healthy bond as perfect married partners.

Before exchanging the vows, Heather and Daymond were parents to their baby girl. Their daughter Minka Jagger John was born on March 2, 2016.

Currently, she is celebrating her 6th birthday in March 2022.

Minka is also receiving wide media attraction as a celebrity daughter. She spends quality time with her celebrity parents and is living lavishly.

The John family of three recently enjoyed their vacation in The Bahamas. Additionally, Minka has an Instagram account with more than 4 thousand followers.

Besides Minka, The 47-year-old founder of FUBU clothing has two other daughters Yasmeen John and Destiny John. The John sisters were born via Daymond’s marital relationship with his first wife, as he was busy with his business then. Thus, his wife left him, and their marriage finally ended in a divorce.

He was married to his first wife before gaining success in his business. The more success he earned in his profession, the more his family time degraded. That led Daymond and his first marriage to come to an end.

Besides, in 2017, Daymond was diagnosed with thyroid cancer. He then went through a successful surgery and is now cancer-free.