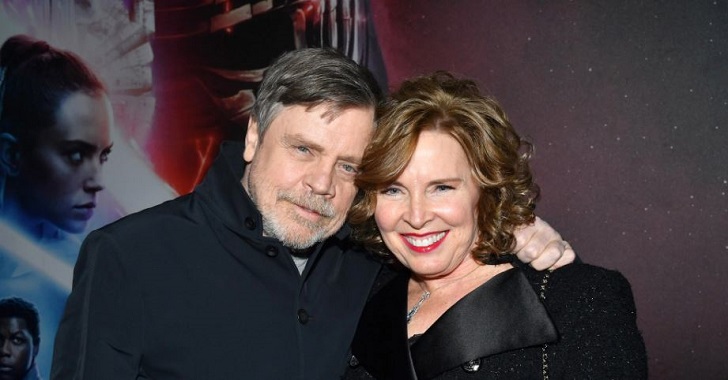 Mark has successfully acted in the Star Wars sequels and won the Daytime Emmy Awards in ‘Outstanding Perfromer in an Animated Program.’ To date, actor Mark has performed in many movies and TV series that have grabbed public attention and earned well at box offices. The 5-feet-8-inch (185 cm) tall Mark enjoys a net worth of $18 million, approximately as of 2022.

Besides living a successful professional acting life, Mark’s marital life is also exemplary in Hollywood Entertainment Industry. Unlike other Hollywood stars, Hamill is in a longtime marital relationship with the same woman he met in his mid-20s. Get the details of Mark, and his wife, Marilou York‘s wedding live in the following sections.

We have heard most celebrities, especially those involved in the field of acting, meet their real-life partners on the set of films or at parties. Unlike others, the Family Guy actor Mark found his partner for life, Marilou York, at the dentist’s office in Los Angeles.

The exact date of Hamill and York’s first meeting is unclear. But Mark was already gaining fame for Star Wars when he met Marilou, a dental hygienist. Mark and Marilou did not take much time to start a relationship, and they went on a movie date to see Annie Hall (1977).

However, after the succession of Star Wars, Mark’s celebrity feelings came over their relationship. He chooses to live in stardom and limelight, which results at the end of his beautiful romantic affair with Marilou. But the separation was temporary; York “thought [she] was good for him, so [she] was hoping [they’d] get back together.” Later, Mark and Marilou reunited after he wished for “something to hold onto and a family.“

After rekindling the relationship, Mark and Marilou did not wait much to take their relationship to the next level. The actor and former dental hygienist married in Malibu on December 17, 1978.

Hamill and York walked down the wedding aisle in a private ceremony held in their home’s backyard in the presence of their close ones.

Since the wedding day, The Sandman actor Mark has been living a healthy and blissful wedding life with Marilou. Mr and Mrs Hamill are celebrating their 44th wedding anniversary this December 2022. This powerful married duo still shares a comfortable marital bond and is an inspirational pair for all.

From the marital solidarity, the Fantastic Four actor Mark and his beloved wife Marilou shared three adorable children. They welcomed their first kid, a son, Nathan Hamill, on June 25, 1979.